Let's restrict our scope to just the UK Government Digital Service (GDS). They have spotted the making-a-difference fashion and adopted it for their endless and compulsive recruitment drive: 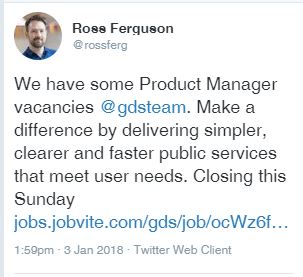 The examples could be multiplied. There's this – We're looking for an inspiring Service Manager: "We want someone who is as committed to transformation as we are, and in return we will offer a friendly, supportive working environment full of people who want to make a difference". And there's the Ross Ferguson tweet alongside. You will have no problem finding further examples.

Is it really such a good idea for GDS to market themselves on the basis that they make a difference?

Catching flu makes a difference to millions of people and presumably GDS don't want to suggest that they're a debilitating virus but that possibility is not excluded from their glib marketing.

Does the flap of a butterfly’s wings in Brazil set off a tornado in Texas? Any event must have a cause. That's how we think. Rightly or wrongly. Every action of ours must have an effect. Trivially, it follows that it is impossible not to make a difference. What is the non-trivial point that GDS are trying to make?

Presumably GDS want you to understand that they know what they're doing, they know what difference it is that they are trying to bring about, they're not just a Brazilian butterfly unwittingly bringing destruction to Texas. But what is it that they know? How do they know it? And why don't they tell us?

When President Clinton demanded back in 1992 that mortgages be made available to everyone he caused the credit crunch of 2007/2008. What is there to protect GDS from the law of unintended consequences? Nothing.

The public sector ethos is an appealing idea. The suggestion is that public servants are uniquely altruistic and motivated only by increasing the public good. Piffle. Anyone working in the private sector, whether or not they are inspiring and talented and committed and passionate, could do more good and/or less harm than a GDSer. That's a hypothesis. What is GDS's counter-argument? How do GDS measure the public good? They don't say.

GDS hold themselves out as being bathed in the glow of making a difference. But making a difference is an empty claim without a lot of supporting definition and evidence and argument. Potential recruits are recommended to ask at interview what this difference is that GDS claim to have made in the past and promise to make in the future.
Posted by David Moss at 12:19