On 16 October 2013 ex-Public Servant of the Year ex-Guardian man Mike Bracken CBE ex-CDO ex-CDO, ex-executive director of the Government Digital Service (GDS) and ex-senior responsible owner of the pan-government identity assurance programme now known as "GOV.UK Verify (RIP)", delivered an astonishing lecture to the Code for America Summit. But you know that.

What you may not know is that his deputy, Tom Loosemore, delivered the same lecture to the same audience a year later, 23-25 September 2014:

Mr Loosemore's was more or less congruent with the Bracken script.

There was one slip, between 5'18" and 5'42", when he promised that GOV.UK Verify (RIP) was going to go into public testing "in a few weeks" – the previous year, delegates had been led to believe that it was already live with 45 million users.

Otherwise, the same buttons were pressed. Particularly the Whitehall button. Whitehall wouldn't know how to modernise its services even if it wanted to, Mr Loosemore said, 2'40"-3'02".

The only component Mr Loosemore added to the speech was "the GDS dream": 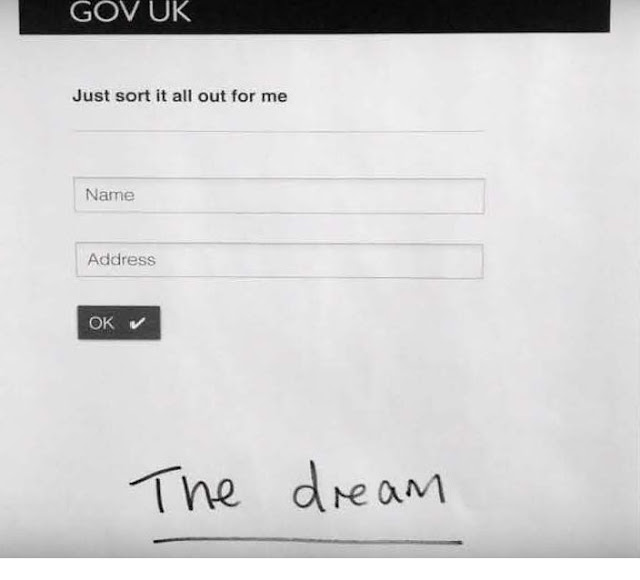 Ear tags for goats and the case of the missing platform

One week to go before the Chancellor's Autumn Statement and we know just two things about Government as a Platform (GaaP):
And that's it. There are four platforms, according to GDS. And no others.

Or are there? Are there some other platforms knocking around which GDS for some reason fails to mention?

Warwickshire and the missing attribute – progress

It is just over a month since we last reported on blue badges.

For anyone who doesn't know, the UK Blue Badge Scheme "provides a range of parking and other motoring concessions for people who are registered blind or have severe mobility problems".

Tthere has been an agile flurry of blue badge digital activity in the last 24 hours. @helenolsen wants you to know that Warwickshire are working on an attribute exchange hub for blue badge applications. So do @ukalocaldigital, @UKAuthority, @LDgovUK and @localdirectgov.

Their common source is an article on the UKAuthority.com website:
Warwickshire County Council have worked on GOV.UK Verify (RIP) with the Government Digital Service before. It didn't go well.

Mark Thompson believes that 1½ million public servants could be laid off and £35.5 billion could be saved as a result, if only the UK civil service followed the example of Spotify, eBay, Airbnb, Rightmove, Uber and Amazon.

Any number of people believe the same thing. Douglas Carswell MP, for example, the UK Member of Parliament who wrote The End of Politics and the Birth of iDemocracy, reviewed here in February 2013.

Even HMRC may believe it. Her Majesty's Revenue and Customs are trying to break their giant ASPIRE contract into lots of little ones which is part of the Mark Thompson prescription. ASPIRE is unwieldy and ponderous. And expensive. Replace it with a lot of nimbler and more innovative contracts, and the result might be more efficient and cheaper. The question is, how do you get from ponderous to nimble?

He may be right to be pessimistic about Bain's assignment. But if Mr Thompson had specified how to achieve his £35.5 billion of projected savings, then HMRC wouldn't have had to call in Bain.

Mr Thompson rejects that criticism, ruefully asserting that HMRC and others don't listen to people like him. You may get the impression of Mr Thompson as a lone thinker coming up with great ideas that Whitehall are too hoity-toity to listen to, a powerless Mr Thompson signalling to distant central government departments while trying to stay afloat in a sea of pathos.

But, there's a wrinkle.