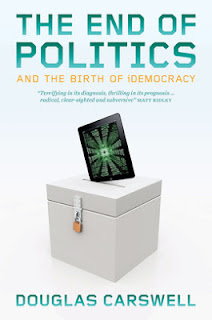 Make Directgov [= the Transformation cluster/GOV.UK] the government front end for all departments' transactional online services to citizens and businesses, with the teeth to mandate cross government solutions, set standards and force departments to improve citizens' experience of key transactions.

Change the model of government online publishing, by putting a new central team in Cabinet Office in absolute control of the overall user experience across all digital channels ...

I strongly suggest that the core Directgov team concentrates on service quality and that it should be the "citizens' champion with sharp teeth" for transactional service delivery.

Directgov should own the citizen experience of digital public services and be tasked with driving a 'service culture' across government which could, for example, challenge any policy and practice that undermines good service design.

It seems to me that the time is now to use the Internet to shift the lead in the design of services from the policy and legal teams to the end users.

Directgov SWAT teams ... should be given a remit to support and challenge departments and agencies ... We must give these SWAT teams the necessary support to challenge any policy and legal barriers which stop services being designed around user needs.

A new central commissioning team should take responsibility for the overall user experience on the government web estate, and should commission content from departmental experts. This content should then be published to a single Government website with a consistently excellent user experience.

Ultimately, departments should stop publishing to their own websites, and instead produce only content commissioned by this central commissioning team.

Ultimately it makes sense to the user for all Government digital services to reside under a single brand ...

... leadership on the digital communications and services agenda in the centre is too fragmented. I recommend that all digital teams in the Cabinet Office - including Digital Delivery, Digital Engagement and Directgov - are brought together under a new CEO for Digital.

The CEO for Digital should also have the controls and powers to direct set and enforce standards across government departments ...
They want to make public services digital by default. That is, they want public services to be delivered over the web and, to the greatest extent possible, only over the web.

They have set up the Government Digital Service (GDS). The chairman of the GDS advisory board is Martha Lane Fox, the Prime Minister's digital champion. She wrote the terms of reference for GDS and, in theory:


Mr Carswell has no plan for how power could be transferred from the government to the public via the web. Whitehall does have a plan. But it's a plan that will ensure that control remains with the Executive at the centre. Same tool, but the opposite result from Mr Carswell's preferred reintroduction of localism and the city-state.

GDS ignore the risk of identity theft posed by storing our personal data on the web. They ignore the human need for privacy. They have no experience of public administration. All they have is a reverence for the web.

The web is a powerful and virtuous tool in the right hands. In the wrong hands, it remains powerful.

It is a mistake to revere the web. If you need any further confirmation, read Al Gore: US democracy has been hacked in the Guardian yesterday. Al Gore? The prosecution rests its case.
Posted by David Moss at 01:03