The Government Digital Service (GDS) are trying to transform government by making it digital by default. They have chosen 25 public services as exemplars. Exemplar no.9 is a service for DVLA – the Driver and Vehicle Licensing Agency – and is described as follows:
That's point #1.

Point #2 – GDS have been trying for some time to get identity assurance working. On 11 February 2014 they told us that IDA was finally being tested behind the scenes, and that testing on exemplar no.9 would start to use IDA in public in March:
Point #3, on 1 April 2014 DVLA announced that:
"... after 15 months of hard work this was it", they said, "we had delivered the first part of what we had set out to achieve ...".

Can you now see "what vehicles you can drive and any penalty points and disqualifications" on-line? Yes.

And can you see IDA in action? No. 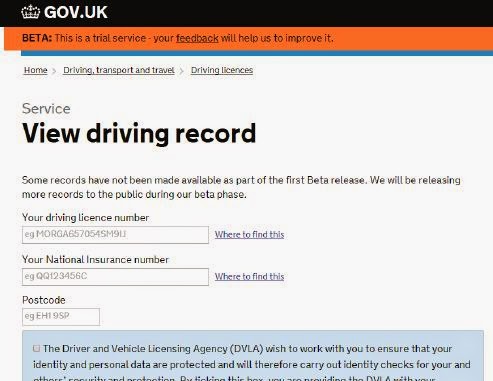 After 15 months of work, what we get is the screen form above with just four fields to fill in and when you press the button you get two database lookups – the vehicles you can drive and any points on your licence. Maybe it's harder than it looks but it doesn't look as though that should take 15 months. Not if you're using "agile" software engineering methods.

Leave a space in your National Insurance number or in your post code when you enter it, and GDS tell you "Sorry, due to a technical problem we can't display your details right now. Please try again later" – an obtuse way to tell users to remove the spaces, and a surprising approach for an organisation that prides itself on designing user interfaces.

This heavy reliance on National Insurance numbers to identify us is likely, we are told, to underpin the individual electoral registration service due to be released in June 2014. Does it provide adequate assurance?

All of these matters and more we can debate. But, point #4, that debate is set against the background of the continued glaring absence of IDA. Where are the so-called "identity providers"? Where are the personal data stores? Where is the secure identity hub?

If you were born yesterday.

But as the rest of us know, if only from the 8 April 2014 post above, the service was launched at least six months ago.

No-one knows why it was launched then.

It's of no use to drivers.

And no-one knows why it's being re-launched now. It's still of no use to drivers. And it still operates without the benefit of the long-promised identity assurance.

as a supplier, i've been to a few tender presentations where integration with ida was required so I would say it isn't dead but perhaps under the radar.

"Integration with ida" does not imply the existence of IDA.

When the TALISMAN system was introduced in about 1980 to match bargains on the Stock Exchange it had to support all bargain conditions, of which there were a couple of dozen, including "CT", I think, denoting a contango. It had to, and so it did, despite the fact that there were no contangos and hadn't been for as long as anyone could remember.

it might be dead but they're going to spend 30 million on it. looks like we're getting NI numbers in lieu of identity cards.