Monday 29 September 2014, the week was launched with these rousing words:
Be still my beating heart, the strategy is no less than to ..
Christmas has come early. Not only are we all to get our own on-line tax account but our most Estonian dreams have at last come true – HMRC (Her Majesty's Revenue and Customs) want Martha-now-Lady Lane Fox's digital-by-default to be realised here on earth. They want ...

Mr Dearnley's blog post was accompanied by an HMRC press release which explains that:
You may have wondered. Now you know.

And as the light dawned and brought you round from your dreams did it perhaps occur to you, too, that hang on a minute, don't we already have our own on-line tax accounts?

Each business has its own on-line VAT account, for example (Value Added Tax/Sales Tax). And its own Corporation Tax account. And each business already submits its VAT returns on-line using the Government Gateway. We have done for years. There's nothing new about it. And nothing new about submitting our CT600 Corporation Tax returns on-line. Not to mention our PAYE returns (Pay As You Earn/Income Tax). And more.

It's not just businesses. Individuals, too, have been able for years to submit Self-Assessment tax returns to HMRC on-line.

Mr Dearnley reminds us:
He doesn't mean that, of course. HMRC has had digital strategies for decades. 2012 may or may not be the first time a strategy was published.

And he doesn't provide a link to the 2012 strategy. There's a copy available in the National Archives which includes this at para.6.3 on p.17:
That October 2013 PAYE pilot didn't happen. It couldn't. Because GDS couldn't provide IDA, the identity assurance required. We shall see what "wider IDA capabilities [become] available" this month, a year later, if any.

Inexplicably, GDS told the Americans last year that IDA was working. It wasn't.

It still isn't. And yet, inexplicably, someone has told Sir Jeremy Heywood, the Cabinet Secretary and head of the home civil service, that it is.

But enough of that. What, you want to know, about the new strategy? HMRC's 2014 strategy?

At para.8.7, HMRC's digital progress is enumerated in 22 "Actions". And for each Action, there is a "Commitment".

Action 2, for example, is to make sure that each digital transaction service has someone in charge, a Service Manager. Good idea. And the Commitment:
Action 3 is strategic and sustainable and involves digital literacy and an agile web development team. The Commitment is:
Action 5:
Ditto Actions 6 and 7.

For Actions 8 and 9:
Whereas for Actions 13, 14 and 15:
This is the strategy of the HMRC digital team, headed by Mark Dearnley, Chief Digital and Information Officer. And the question arises, what with all this working closely with GDS – the Government Digital Service, part of the Cabinet Office – and agreeing delivery plans with them, is there any time left to work with HMRC?

What do GDS know about collecting the money that pays for the UK's public services?

There is no mention of any commitment to HMRC. Only to GDS. 10 times. Who is Mr Dearnley's team working for?

Anglo-Saxon villeins had to swear an oath of fealty to their local liege lord and master. Now they write a strategy document. The oath was quicker:

How many misleading propositions can you smuggle into a single sentence?

HMRC manage two in the extract from their press release quoted above, "We collect the money that pays for the UKs public services ...":
HMRC's tax collection work depends on their £800 million p.a. ASPIRE contract with Capgemini and Fujitsu. The digital team don't mention ASPIRE in their strategy document. Does the team propose to supplant Capgemini and Fujitsu?

If not, what's the point of the team?

Did the villein plight his troth to the wrong Liege? Lord GDS when he should really have chosen Lord HMRC?

How digital is central government in the UK?

But there is some indication, or some sort of a stab at the answer, available on the award-winning GOV.UK's Transactions Explorer: 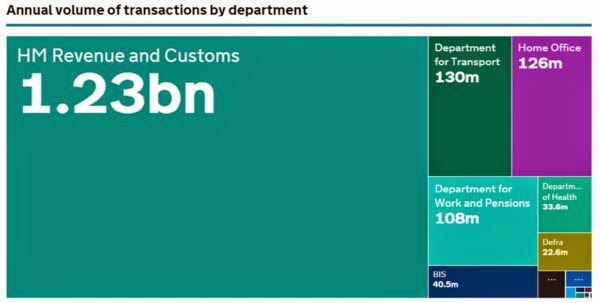 GDS's graphic above is derived from the following table of GDS's figures:


HMRC are party to 72% of all the UK central government transactions GDS have chosen for their universe. No other department reaches even 10% of this volume. The Cabinet Office, for example, home to GDS, accounts for only 0,28%.

HMRC have achieved that position starting before GDS was created in 2011 and without GDS's assistance since then. If anything, it is HMRC who have lessons to teach GDS, and not the other way around.

We still don't know how digital central government is in the UK. But we do know who to ask how to achieve digital transformation.

As if to prove it, here's the lead story in today's Telegraph: