GaaP and the future
Government as a Platform (GaaP). It's "the next phase of digital transformation". That's what Public Servant of the Year ex-Guardian man Mike Bracken CBE CDO CDO, executive director of the Government Digital Service (GDS) and Senior Responsible Owner (SRO) of the pan-government identity assurance programme now known as "GOV.UK Verify (RIP)", told us on 29 March 2015.
Which is odd ...
GaaP and the present
... because he'd already told us two years earlier on 11 January 2013, talking about the transformed Basic Payment Scheme for the UK's farmers, that: "It's going to help us deal with Europe in a different way, and quite rightly we're building it as a platform. It's going to be another example of government as a platform. I'm on the Board, and I'm trying to help them every week ...". GaaP is the current phase of digital transformation, not the next one.
And even before that, on 17 October 2012, in Why GOV.UK matters: A platform for a digital Government, he was talking about the award-winning GOV.UK, the on-line public face of UK government, and telling us that : "It is the first major, full platform release from the Government Digital Service. This release heralds a new approach to digital delivery of public services in the UK". But how new?
GaaP and the recent past
Mr Bracken acknowledges his debt to Tim O'Reilly, the herald who has been promoting the phrase "Government as a Platform" for at least six years, see for example his 26 August 2009 blog post What Does Government 2.0 Mean To You?: "As many of you know, I’ve built a new conference, Gov 2.0 Summit, around the idea of the government as platform: how can government design programs to be generative, to use Zittrain’s phrase?". GaaP is getting older and older before our very eyes.
GaaP and central control
GOV.UK has allowed GDS to get a grip on all central government publishing, as recommended by the revolutionary Martha-now-Lady Lane Fox. Departments and agencies can be commissioned for content to appear on GOV.UK but they no longer have their own websites to publish on.

As it says in the 2010 Martha Lane Fox Constitution for the UK: "Ultimately, departments should stop publishing to their own websites, and instead produce only content commissioned by this central commissioning team [GDS] ... Ultimately it makes sense to the user for all Government digital services to reside under a single brand ... This person [the Chief Digital Officer] should have the controls and powers to gain absolute authority over the user experience across all government online services ... and the power to direct all government online spend ... The [Chief Digital Officer] should also have the controls and powers to direct set and enforce standards across government departments ...".
Given that GOV.UK is a platform, that is one thing that GaaP entails – central control.
But what else does it mean?
GaaP and the Basic Payment Scheme
We should be able to learn more answers from the newly transformed Basic Payment Scheme. But we can't because, despite Mr Bracken working on it, and despite his being the government's Chief Digital Officer (that's one of his CDOs), the digital system crashed on take-off and farmers now have to use the paper and pen platform instead.
GaaP and GOV.UK Verify (RIP)
We should also be able to learn from GOV.UK Verify (RIP), which is meant to be the identity assurance platform for central government in the UK
The government has to govern for everyone. GDS's objective is to be able to include 90% of the population in GOV.UK Verify (RIP) by April 2016. Currently, their sources in the credit referencing agencies can only include 80% of us: "We estimate that GOV.UK Verify can cover approximately 80% of the UK adult population now (up from about 65% at the start of our public beta)". Despite Mr Bracken being the government's Chief Data Officer (that's his other CDO), there is some doubt about that 80% estimate and all the other estimates. But whatever the correct figure, it's not 100%.
How much assurance as to people's identity does GOV.UK Verify (RIP) provide? It's struggling to reach Level of Assurance 2, the standard of proof required for the civil courts. GDS's business partner, OIX, the Open Identity Exchange, tells us that if GOV.UK Verify (RIP) could use our personal bank account information, that "would help [to] achieve the required standards against the 5 elements of identity assurance at level of assurance 2" (p.11).
Even for the digitally literate adults in the UK with a rich credit history and a functioning broadband connection who could currently use GOV.UK Verify (RIP), GDS can't achieve the standards required for the criminal courts, Level of Assurance 3, let alone level 4 and beyond.
GaaP and comprehensive service
GOV.UK Verify (RIP) can't include the whole population and it can't provide complete assurance as to identity. Which means that other methods will have to be used. To the extent that a platform should be capable of doing a given job alone, GOV.UK Verify (RIP) is not a platform. That may be the only lesson we can draw from this example.
GaaP and the previous millennium
Long before Mr O'Reilly's 2009 contribution, the UK had the so-called "Government Gateway", a platform which allows people and companies to transact with central and local government. One of the prime architects of the Gateway dates its inception back to 1998 or thereabouts, which makes GaaP pre-millennial.
Not all platforms are equal
There's a lot wrong with the Gateway but it's sat there working for 15 years or so now. If all the effort put into GOV.UK Verify (RIP), which doesn't work, had gone instead into the Gateway, there might be a lot less wrong with it.
Which teaches us, perhaps, another lesson. Not all platforms are equal.

That doesn't increase our understanding.

Simon Wardley says we need to map the value chain-evolution surface. That doesn't tell us what's going to happen or when, Janet Hughes, Identity Assurance Programme Director, told 200 entrepreneurs at the Four Seasons Hotel, Hampshire, but nevertheless she says inscrutably that she finds Wardley maps useful for GOV.UK Verify (RIP).
And Mark Thomson starts with Wardley maps, then plots ubiquity against certainty and finally advises us to look for "promising clusters" which will, under some circumstances, "literally constitute the government as a platform".

GaaP is beginning to literally look like one of the less promising clusters in the business school lexicon.

GaaP and GDS
In the search for meaning, you may approach GDS themselves. Paul Downey, Technical Architect, opens his blog post Registers: authoritative lists you can trust with a picture: 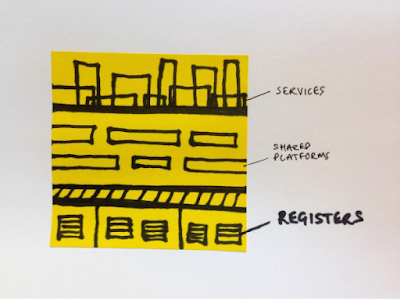 Services rest on platforms and platforms rest on registers. That, at last, seems to tell you something substantial about platforms. They are the means by which trustworthy data can efficiently be turned into useful services. No registers, no platforms.

The first sentence of Mr Downey's post reads: "We’ve mentioned registers a few times on this blog, most recently in relation to the work of the Land Registry building on the steel thread, the brilliant new Companies House public beta, and their importance for building platforms". That seems to convey the same definitive message – if you want platforms, you need registers. But apparently that's not the message because, in response to a question, Mr Downey also says: "there's no implication that a platform must use Registers".

Mr Downey leaves us trying to believe both that it is important for a platform to have a register and that platforms don't need registers. If you can manage that, you'll have no problem also believing that you know what Mr Bracken means when he says that GaaP is the next phase of digital transformation and no qualms agreeing that GOV.UK Verify (RIP) should have access to your bank account.
Posted by David Moss at 23:42