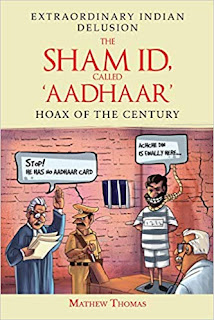 The politicians know that. The civil servants know that. The media know that. So do the lawyers and so does everyone else. Not least because Mathew Thomas has spent 10 years or so patiently telling them.

... UIDAI goes from strength to strength.

The politicians and the civil servants et al aren't stupid. And yet they connive in funding Aadhaar.

Alice in Wonderland? The emperor's new clothes? Tulipmania? Pick your metaphor. Whichever you choose, India is undeniably in the grip of some sort of of an extraordinary delusion, a nightmare from which it will finally wake up.

For years, India's Supreme Court has been hearing the tireless Mathew Thomas's cases asserting that Aadhaar is unconstitutional. The court is due to promulgate its latest decision soon. Independent of political parties and of business interests, the judges have the opportunity to rouse India from its slumbers, to say achhe din aane waale hain and to put an authoritative stop to this Aadhaar nonsense.
Posted by David Moss at 21:05