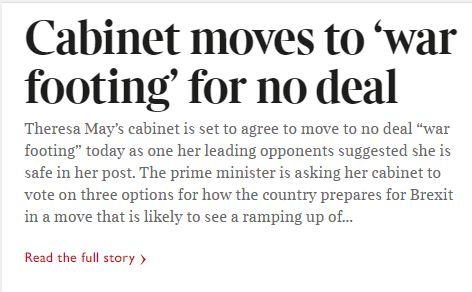 Cast your mind back 212 years and you be the judge.

According to Andrew Roberts’s 2014 Napoleon the Great, starting around p.427, 212 years ago in 1806 Napoleon instituted the “continental system”, which included these articles among others:
Napoleon reckoned that would soon settle our hash ...
... but, according to Mr Roberts:
Plus ça change, the regional prefect of the area that includes Calais is already demanding extra funds to ensure that UK business is not lost to dastardly Belgian and Dutch ports.

Further:
Plus ça change, President Macron, convinced that he is actually Jupiter, and not merely Napoleon, won't compromise. Just like he didn't compromise the other day with the gilets jaunes.

Plus ça change, "domestic criticism", in the person of Anna Soubry and the BBC and the unicorn expert, Philip Hammond, has duly reappeared:
For some reason the "domestic critics" find this imperial prospect attractive. Your highest ambition may not be for the UK to become a colony. You may hope that the government once again "rides it out".

The huge volume of our exports to the EU is a problem for them as well as us:
Fluctuations in the exchange rate? Financial innovation in the City? Expanding into new markets? They've all happened before. And pace the miserable remainers, they could all happen again: