Leafing through Computer Weekly the other day as no doubt we all were revealed this article by Mark Ballard, Soldiers nail data for agile offensive on $6bn cock-up:
$6 billion over budget? 31 years behind schedule? So it doesn't just happen in the UK:
"IPPS" is the US Army's Integrated Personnel and Pay System – you didn't want to know that – and "ERP" is Enterprise Resource Planning, which is an earlier software engineering philosophy which was going to solve all our problems.

Earlier than "agile methods". Agile methods are the latest cure-all. You'd think after a while the gullible would stop falling for cure-alls and that they would notice that the same suppliers hang on year in year out, but no.

What went wrong with the ERP approach to paying the army? It's highly technical, of course, but readers should not be patronised by having the difficulties hidden from them:
This won't have occurred to you but apparently, it has been discovered, recent high-level research suggests, if the data is wrong or not "authoritative" that can have an adverse effect on the system. Also, while several billion dollars were changing hands, no-one seems to have noticed that different systems store data in different ways that are not what we software engineers call "compatible".

If only we'd known before.

Actually, we did. Chris Chant told us. Remember his unchallenged 23-point list of what's wrong with UK government IT? Point #19 was "Government should use small and medium size suppliers whose IT practices are more 'agile' but instead they stick with the big ponderous suppliers".

And what does "agile" mean? What do agile software engineering methods look like?

Ask GDS, the Government Digital Service. They're the IT frontiersmen at the Cabinet Office having praise heaped on them by Francis Maude and Sir Bob Kerslake. They're going to transform government and deliver more for less following the digital by default precepts of Martha Lane Fox.

Let Mike Beaven of GDS explain what it's like to be Riding the Paradigm – where agile meets programme:
The encounter group facilitator in you will want to thank Mike for that contribution but there's still a niggling sense, isn't there, that it's not clear how the troops are going to be paid, or whatever.

What, for example, explains the enormous pride with which ex-Guardian man Mike Bracken writes, in Digital a key component for Civil Service Reform Plan:
All well and good, Mike, but suppose we have to tweet @sirbobkerslake using the hashtag #tellsirbob? What do we tell him? How do agile methods help? 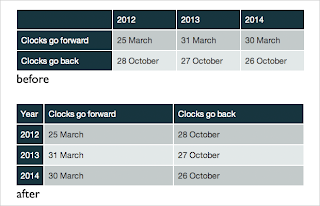 For the answer to that, we have to turn to Chris Heathcote, one of the stakhanovites toiling away in the GDS boiler room, whose blog post The speed of change at last casts light on the matter. There he treats us to the hero's tale of how he went over the top and responded to a tweet about when the clocks change.

Not only did one Caspar Aremi feel that the government website devoted to this matter should show the columns as rows and the rows as columns but he even found the time in his busy schedule to tweet about it. And Mr Heathcote rose to the occasion. Scary stuff. But that's not all – the crucial point is that, presumably because he had nothing better to do, he did it the same day as receiving the tweet. Agile, or what.

Therein lies ex-Guardian man Mike Bracken's pride – at the accomplishment of one of his staff who can respond quickly to a footling request.

And therein lies the confidence that Francis Maude's future and Sir Bob Kerslake's, and our tax money, are all in good hands. "Agile" means sleeping easy of a night, one size does not fit all, trust is key, let the GDS team do the worrying. And the spending.

Mr Heathcote's claim to have demonstrated the true benefits of agile methods is attracting a certain amount of contumely. "One change, one day thanks to Agile? I feel sorry for whoever is in charge when real music starts to play!", says Andres Crespo. Quite. On that day, maybe the US military will give Messrs Bracken, Beaven and Heathcote a job. And Bob Kamall and Paul Downey.
Posted by David Moss at 13:31