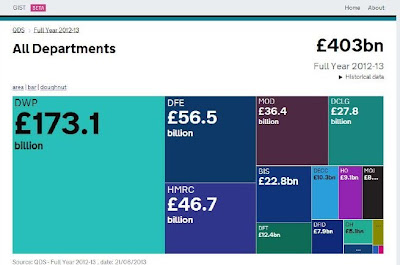 Here, for example, is Pete Swabey, writing on the Information Age website:
Few. What a scorcher.

ElReg have provided some really good feedback, too:
The "cock-up"  referred to is the unfortunate omission from GDS's infographic of the UK's £50 billion p.a. of debt interest, a point which ElReg picked up from Guido Fawkes's, No Interest in New Government Spending Website – you get the gist.

Readers who submitted comments to ElReg also expressed mystification at the annual Department of Health expenditure quoted in GDS's easy to use and intelligent infographic as £5.1 billion. They were expecting a figure closer to £120 billion.

The "digital revolution, masterminded by a team of dress-down civil servants" quotation comes from Rachel Sylvester's column in the Times on Wednesday, Geeks in jeans are the Treasury’s new heroes, the latest episode in GDS's PR blitz.

Much more positive feedback like Information Age's, ElReg's and Guido Fawkes's and GDS are going to run out of biddable publicists, even at the BBC and the Guardian. And the Times.

Readers may remember POST, the Parliamentary Office of Science and Technology. We last encountered them misbriefing MPs on the subject of on-line identity management.

Now POST have produced a paper on Invasive Alien Plant Species:
Are POST trying to tell us something about the effect of the advent of GDS on the habitat in Whitehall?
Posted by David Moss at 17:10