3 December 2011
It's two-and-a-half years since we first looked at Ctrl-Shift Ltd, the consultancy firm.

They had recently published a report, The new personal data landscape. Their claim was that national economic growth will be achieved if only we all of us make it easier for companies to know all about us. If we would just release all of our personal data, then "Ctrl-Shift’s research finds that the market for these new streams of information could grow to be worth £20bn in the UK over the next ten years" (p.14).

No evidence supporting this economic hypothesis was advanced in Ctrl-Shift's report:
Who would be convinced by midata? "The answer is a mooncalf", we said in December 2011, not least because of this passage in the Ctrl-Shift report (p.14):

If Ctrl-Shift had found a way of predicting the future, an investment bank would have bought them by now and cashed in. Ctrl-Shift haven't been bought, which leaves them in the same position as every other astrologer who ever promised the local potentate that he or she could predict and maybe even shape the future.

9 June 2014
"Groundbreaking research on the personal information economy", it says on Ctrl-Shift News:
They're back.

"It is the first research of its kind to quantify the economic impact of this emerging market", they tell us, again, two-and-a-half years after the last first time.

They've dropped midata. This time round, Ctrl-Shift are focusing on "identity assurance":
No mention in that news item of the fact that Mydex, the personal data store provider, has also been appointed one of the UK's "identity providers" – BIS/Vince Cable's loss is the Cabinet Office/Francis Maude's gain.

What is the future that Mr Maude promises? 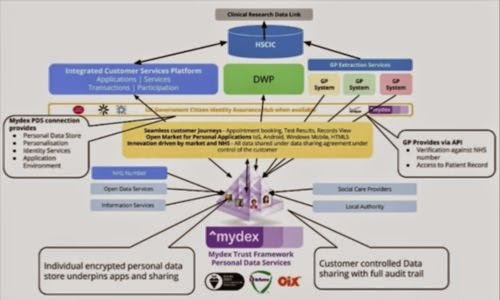 Is the magic working better now?

Next day, 10 June 2014, sees the start of individual electoral registration (IER) in England and Wales. Will IER be supported by identity assurance? No. The Cabinet Office's Government Digital Service can't get it working.

(And they couldn't get it working in March 2013 for Universal Credit at DWP, the Department for Work and Pensions.)

(And they couldn't get it working in October 2013 for PAYE Online at HMRC, Her Majesty's Revenue and Customs.)

And a week later, 16 June 2014, sees the sentencing in the US of the fraudster Hieu Minh Ngo. The judge is expected to have a few words to say about the ease with which Mr Ngo acquired personal data from Experian. Experian is another UK "identity provider", like Mydex. The trust, which all parties agree is needed for identity assurance to work, has already bolted.

It's nearly four years since the identity assurance project was launched, 20 September 2010. There's still nothing to show for it. The warnings are there – anyone prepared to invest in it now must be possessed of a confidence which is itself miraculous.

The tension mounts – mooncalf economics, your opportunity to invest, only one week to go, Monday 9 June 2014, as Ctrl-Shift remind us in a Tweet:


DMossEsq isn't licensed to give investment advice. Are Ctrl-Shift?

Next day, Tuesday 10 June 2014, sees individual electoral registration go live. Without GDS's promised identity assurance (RIP). And with no sign of life from midata either, except in the Telegraph, where they can't even spell it.

And then a week later, 16 June 2014, it's all eyes on New Hampshire and the sentencing of Hieu Minh Ngo. What will the judge have to say about GDS's "identity provider" Experian and the security of the data broker/personal information economy? How safe are we, we mooncalves, as the ground breaks up under Ctrl-Shift's research?

Now the zombie stirs again for one last time.

New energy data sharing systems to be developed, a press release told us the other day. The Department for Business Innovation and Skills (BIS) and the Department of Energy and Climate Change (DECC) herded a lot of energy organisations together and pretended that there's life in the old dog yet – midata will help smart meters by making it easier for you to give your data away to even more organisations:
It is fitting that the Minister at BIS who brought midata mewling and puking into the world in November 2011 is now the Secretary of State at DECC, where he can preside over its final, energy-efficient interment.