This is very odd: "Liam Maxwell, the government’s chief technology officer, told PublicTechnology.net that the government would not be funding or instigating a single website platform for local government similar to the central government .gov.uk model".

Mr Maxwell's non-announcement is made in a PublicTechnology.net article, Bracken outlines G-Cloud engagement aim, about the putative savings made by the Government Digital Service (GDS) and their award-winning GOV.UK. Public Servant of the Year ex-Guardian man Mike Bracken CBE, executive director of GDS, says: "We are finding there is a lot of education to be done ... In the next Parliament we will engage more with the wider public sector on G-Cloud".

"The government will undertake more intensive engagement and education for local authorities on the G-Cloud purchasing framework from next year", as PublicTechnology.net put it.

What's going on? Why is poor old local government being singled out for re-education in Bracken's second term?

It all goes back to a BBC business news article, Councils 'wasting millions' ignoring government IT cloud:
G-Cloud – the Government Cloud – is the Cabinet Office initiative to make it easier for central and local government departments to buy IT products and services.

To most people, putting your applications and data in the cloud means losing control of them. But if Francis "JFDI" Maude says that cloud computing is "quicker, cheaper and more competitive", that's good enough for the BBC and they go on in their article to quote the "shocking findings" of Bull Information Systems:
And not just Mr Carr. The BBC also quote Phil Dawson of Skyscape saying that adopting cloud is a "no-brainer":
Who knows, but perhaps local government prefers to use its brain? 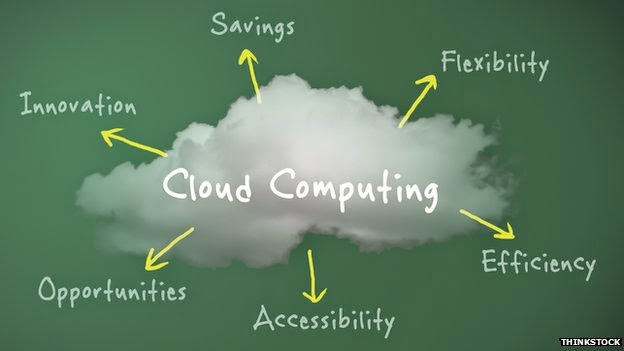 Perhaps local government isn't entirely convinced by the balanced case in favour of cloud computing dutifully reproduced by the BBC, please see the graphic alongside.

There again, perhaps local government is just being selfishly recalcitrant in the face of "modernisation" because it will involve job losses (40,000 of them, that's the figure GDS always quote). Even there, the helpful Mr Dawson has some advice. Let them eat cake write apps:
That's presumably what convinces the Taxpayers' Alliance to say in the same BBC article:
It may beggar the Taxpayers' Alliance's belief but perhaps there is actually a case against cloud computing that they haven't considered. Local government have made a few attempts to explain it, e.g. Socitm challenges G-Cloud 'waste' report and Councils deny 'wasting millions' by ignoring G-Cloud. The Taxpayers' Alliance may recant when it occurs to them that by putting all taxpayers' records in the cloud, HMRC would lose control of them.

You can join in with the popular rubbishing of local government if you like. Up to you. It's fashionable. There's a lot of it about. You could take a look at the Technology Manifesto published by Policy Exchange, the "think" tank, if you want to know what memes are trending at the moment. Them, or the New Local Government Network – they're always good for a sneer.

Just be aware that (a) that's where most government takes place, locally, and (b) there is a plan – the plan that is denied in the PublicTechnology.net article that we opened with.

Last January, Richard Copley wrote Let’s Replace Council Websites with Local.Gov.Uk – a GDS for Local Government. Mr Copley thinks it would be feasible and beneficial if there was just one website for all of local government in the UK, just as there is notionally just one website – GOV.UK – for central government:
It may be arithmetically obvious to Mr Copley that the British Constitution should be re-written. You may disagree. You may feel that the Martha-now-Lady Lane Fox revolution has already been indulged with too much credulous observation. But the Estonian plan is there. As PublicTechnology.net say:
"The first event", PublicTechnology.net tell us on 9 June 2014, "taking place next week is being run by the Department of Communities and Local Government in partnership with the Government Digital Services ... The second event, a 'Hackathon', is being held the next week in Birmingham, and is being organised by council digital network LocalGov Digital, with innovation charity Nesta".

DMossEsq's millions of readers already know that the popular belief among politicians, public servants and the media that GDS have the experience to govern the UK is inexplicable. They know that behind the self-regarding publicity very little has been delivered by GDS and quite a lot has been delivered by other departments of central and local government. They also know that these moves to centralise, consolidate and standardise public services rarely deliver the savings promised. What they do deliver is too much power in one place.

What the millions may not know is that there was a showcase for digital government held at the Royal Institution, of all places, the day before yesterday, 13 June 2014 – PrimeConf: "Our conference is going to be a celebration of great British technology and technologists. Taking a countrywide approach we have invited guest speakers from around Britain to talk about what they know and what they do. We will also be live streaming the event so everyone who wants to can watch regardless of location".

Public Servant of the Year ex-Guardian man Mike Bracken CBE, executive director of GDS, spoke at the conference on Introducing the Govstack: British Civic Infrastructure For The Digital Age:
Local government can get a taste of what they're in for from the #PrimeConf Twitter feed. For example:

"Government thinks it's really complex, but digitally it's about the complexity of a medium-sized dating site." -@undermanager #PrimeConf

The man being quoted there, the man who tweets as @undermanager, is Russell Davies, "a Creative Director at GDS".

That's the wisdom which GDS brings to the table. Government is a medium-sized dating site. Good luck, local government.
Posted by David Moss at 19:41