Here's a selection of GDS posts and a film in the week leading up to purdah:

The UK Government Digital Service (GDS) continue to recruit for their GOV.UK Verify (RIP) system. Just at the moment they're looking for three WebOps engineers to assist in the funeral rites:
"Working with sensitive data and in a secure environment" is a skill GDS would like you to bring to the graveside, but it's only "desirable", not "essential".

He seems to have misplaced it since then but back on 11 January 2013, Public Servant of the Year ex-Guardian man Mike Bracken CBE CDO CDO, executive director of GDS and senior responsible owner of GOV.UK Verify (RIP), assured us that The Future is Here:
That turned out to be 400 business days. Using a 226-day business year, the expected date of delivery for "fundamental transformation of our mainstream services" was 19 October 2014. That's 400 business days or 646 calendar days after 11 January 2013.

Did it work? Did GDS succeed? Were central government services transformed six months ago in October 2014?

"Yes", said Mike Bracken, 760 days after firing the starting pistol, on 10 February 2015 when he published That was 400 days of delivery, the future has arrived. Under this picture ... 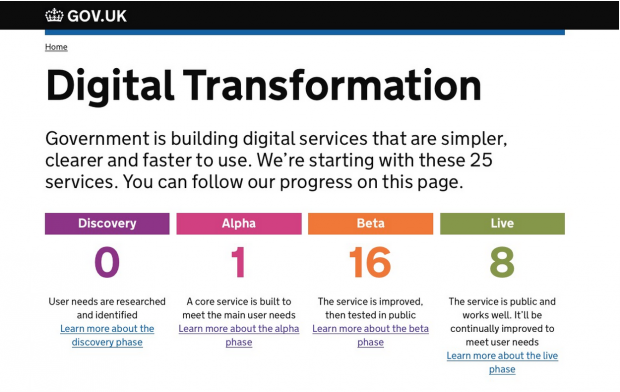 ... he said:
The target was 25 live transformed central government services. GDS achieved 8. Or "17", as Mr Bracken calls it. And that was a "great success".

Live? Or still in beta? What's the difference?

Who cares? It doesn't matter what the numbers say about the promises made for transformation. Or the words. The point is that "this is a huge achievement", a "huge achievement" of which GDS can be proud. So proud that:
... although these 25 exemplars aren't "finished", they have "ended", and GDS are "just beginning" by deleting archiving the evidence.

How did GDS achieve this unfinished but ended and deleted archived success right at the start of transformation? "We've done it by putting user needs first".

Since then we have had the débâcle of rural payments, exemplar #8 out of 25:
The digital system has had to be withdrawn and farmers now submit their claims on paper. ("We’re still tweaking the user journey", as Mr Beavan Beaven put it.)

Rural payments failed despite Mr Bracken being heavily involved in its development, please see Agile@DEFRA:
And GDS's attitude to the users – the farmers – during the course of this "huge achievement"? The system is fine. It's the wretched users that don't work.

They're too old. They're not computer-literate. And they live in the countryside, where broadband is either slow or non-existent. That's what GDS told the esteemed editor of Computer Weekly, that's what he faithfully reported and that's what "putting the user first" means at GDS.

Since then, the esteemed editor has gone on to point out that GDS are trying to airbrush exemplar #8 out of history. So much for their candy floss claims of openness. And a real live farmer has suggested that it was precisely because of GDS's oversight and meddling that the rural payments system failed.

During purdah, GDS have only limited opportunities to promote their cause. So they're getting other people to do it for them, please see At 18F, The U.S. Looks to Fail Fast on Government IT Projects Instead of Failing Big:
It might help him and the applicants for the WebOps jobs to read GDS's achievement before we move on to the other pre-purdah posts in the table above.

Hat tip Bryan Glick, extract from the The Conservative Party Manifesto 2015 (p.49):
The list of the 8 or 17 or "20 high-quality digital services" mentioned there has been deleted archived. The Rural Payments Agency have saved farmers "time, hassle and money" by moving the "high-quality" Basic Payment Scheme off-line and onto paper.

The WebOps jobs mentioned in the post above are now being offered on the stackoverflowcareers website. We knew about most of the benefits of working at GDS. Cake, and so on. Stickers, bunting, ... But the on-site massages/reflexology come/comes as a bit of a surprise. Is that the secret of GDS's achievement? 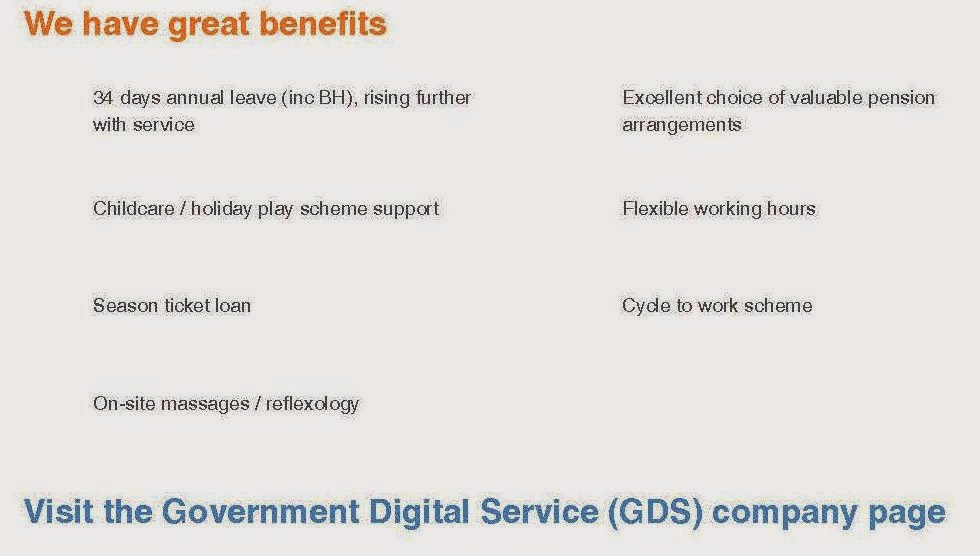 Only the other day, we were asking

Shame we can't spell the man's name – "Beaven" – we might have got the answer sooner.

Whatever, now we know. Mike Beaven, previously director of transformation at the Government Digital Service is now director of digital at Methods Digital, the people who think the UK can transform £35 billion off the deficit by firing 1½ million useless public servants thanks to Government as a Platform.

On p.21 (or "6/12" as the NAO call it) the Committee are told  about the Government Digital Service's exemplar programme: "By its deadline 20 exemplar services were publicly available, 15 of which are live".

On 10 February 2015 Public Servant of the Year ex-Guardian man Mike Bracken CBE CDO CDO, executive director of GDS and senior responsible owner of the pan-government identity assurance programme now known as "GOV.UK Verify (RIP)", published That was 400 days of delivery, Even he didn't think the deadline was as late as April.

And even he didn't think that 20 exemplars were "publicly available". He only claimed eight live services and nine in public beta.

8 out of 25 is a poor score. Embarrassing enough for Mike Beaven, the director of transformation, to hide the transformation dashboard in the National Archives and to announce on 27 March 2015 that: "The programme has ended ... We’re only just beginning".

Both Mr Bracken and Mr Beaven have subsequently resigned.

All that GDS's on-line IER system does, we are told, is to collect applications to register and forward them to EROs. The applications could come from anyone. It's up to EROs to do their own identity assurance.

Still on p.21, the NAO mention GDS's plans for Government as a Platform (GaaP).

GOV.UK is a platform. A publishing platform. A publishing platform that centralises control. GDS can and do refuse to host transaction facilities the departments of state want to offer to the public. If these facilities do not meet GDS's standards, the departments are stumped – they no longer have their own websites to publish on. Is that healthy for public administration?

The NAO say that GOV.UK Verify (RIP) was "delayed several times in 2014" (p.22). Not for the first time. We were previously told that it would be "fully operational" by the spring of 2013, ready for use by 21 million claimants on DWP's services.

It wasn't fully operational then and it still isn't. GDS's progress reports, of which we have had five so far, successively move the deadline forward, always six months or more into the future.

The description of GOV.UK Verify (RIP) on GOV.UK makes it sound as though it's all about helping people to transact with government. To submit tax returns, and so on. Which means it comes as a surprise to discover that Janet Hughes, the programme director, spent 4 September 2015 telling 200 entrepreneurs gathered together by some venture capitalists that they would be able to make money out of GOV.UK Verify (RIP).

Even more of a surprise when you remember that we already have a platform for transacting with government – the Government Gateway – and have had for 15 years.

One of GDS's advisors, a consultant called Simon Wardley, explains that it's a matter of plotting value chains against evolution. Janet Hughes told her 200 entrepreneurs that she finds Wardley "maps" very useful when considering GOV.UK Verify (RIP) although they don't tell her what's going to happen or when.

Even more inscrutably, a consultant called Mark Thompson, who now employs Mike Beaven, or soon will, please see above, starts with Wardley "maps" but then plots certainty against ubiquity on a mission to find "promising clusters" which will, under some circumstances, "literally constitute the government as a platform".

Mr Thompson goes on to estimate that GaaP could save the Exchequer £32 billion p.a. and make 1½ million public servants redundant, a fact not included in the NAO briefing to the Committee.
Posted by David Moss at 13:33