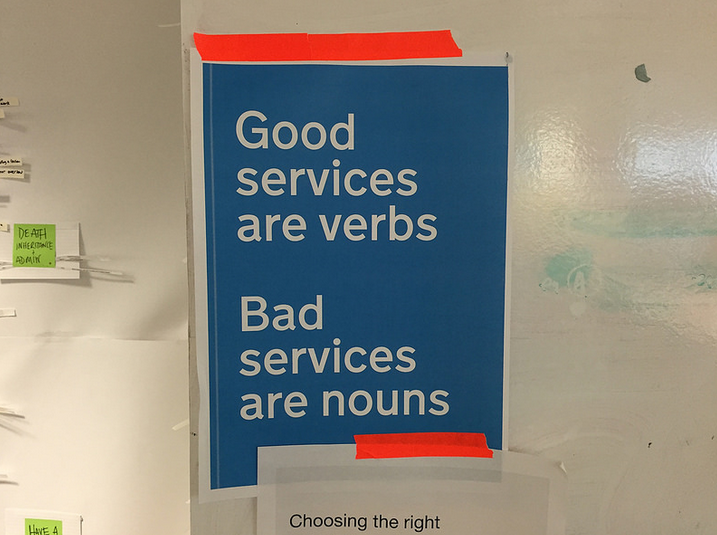 To a user, a service is simple [Unless it's complicated]. It’s something that helps them to do something - like learn to drive, buy a house, or become a childminder. It’s an activity that needs to be done. A verb that comes naturally from a given situation that cuts across transactions, call centre menus and around advisors towards its goal. [Has any user in the research lab or anywhere else actually said that? Evidence, please.]
But this isn’t how government sees a service. [Phew.]
For government, services [nouns] are discrete transactions that need to be completed in a particular way. Because of this, they need to be easily identifiable so that the people who are operating them can become familiar with them and assist a user to complete the task. So we’ve given these transactions names, nouns, ["name" and "noun" are not synonymous, "red" is the name of a colour in that it denotes that colour but it's not a noun, it's an adjective, and "apply" denotes an action but it's a verb, not a noun, let's not confuse grammar with metaphysics ...] that help to keep track of them. Things like 'Reporting of Injuries, Diseases and Dangerous Occurrences Regulations 1995 (RIDDOR)' or 'Statutory Off Road Vehicle Notification (SORN)'. 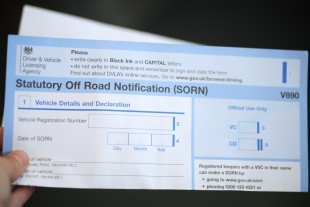 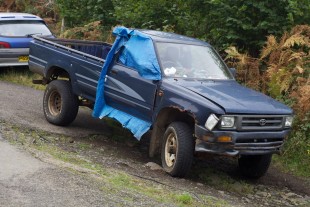 'SORNing' a vehicle in order to stop paying tax on it [That's important. We have no trouble in English switching between nouns and verbs and adjectives to achieve the same purpose. That tells us that the grammatical part of speech is independent of the action. Is a gerund a good service?]
The trouble with names like these are [is] that you need to be introduced to them before you can use them, meaning that part of ‘doing a thing’ means learning what government calls the thing you’re trying to do [that's not true, is it, you can paraphrase, you can ask in a foreign language, you can do a Google search, ... is this post itself an example of an applicant seeking a service they can't quite name?].
Imagine walking into [a] crowded room and trying to find a doctor, and only once you’ve learned her name can you ask her to help you. That’s how using a lot of government services works [no, it isn't, the analogy fails].
This confusion drives millions of users to call government call centres for help, or worse [GDS needs to overcome its horror of people], attempt to use a ‘service’ in the wrong way or in the wrong order leading to failure for the user, and vast amounts of unnecessary work for government.
In the past, we used advertising to ‘educate users’ in our nouns, [no, in our services]. Forcing the kind of brand familiarity that came naturally to well used objects like Sellotape, Hoovers or Biros [neither Sellotape nor Hoovers nor Biros is naturally occurring, the analogy fails].
The Directgov advertising scheme that taught the UK to ‘go directgov’ in order to tax a car. [That's marvellous. And what an eye-opener. Almost as if the UK had digital services before GDS existed. "directgov" (naturally occurring?) remains a noun, though – does that make it a bad service?]
But in reality most government services are used only once or infrequently at best [that may be true in reality but in the UK HMRC undertakes 1.24 billion transactions p.a.], so brand familiarity really isn’t very useful [that doesn't follow, you may only rarely use AK47s but it's still useful to know that they're dangerous].
That means people who’ve done it before need to fill in the gap and provide our service for us. For those with the means, that’s a lawyer, accountant, or professional ‘government translator’, for everyone else it’s probably a friend or a family member - whose advice may or may not be right [there's that GDS horror of people again and there's that assisted digital project that keeps on starting].
Quite simply, our services are designed for expert operation, which worked perfectly well when services were provided by trained expert humans, but means that these services don’t work unassisted on the internet [where do all these people go to get training to become expert at using pornography services verbs?].
These noun services [?] aren't helpful. We need to turn them into verb services [?].

The first step to fixing this [the problem hasn't been defined yet, it's too early to offer a solution] is [to] find out what your users are actually trying to do when they’re using your service [good idea, who knew?].
Choosing the right verb is difficult [except when it's simple], and will mean that you need to do user research to find out what your users are trying to achieve and how your service fits in with that [good idea, see above].
After several rounds of user testing, the Home Office changed the name of ‘Immigration Health Surcharge’ to ‘check if you need to pay towards your health care in the UK’ ["health", "care" and "UK" are all nouns, not verbs, and what about the possessive adjective "your"? That's not a verb either.] - a service [verb] that allows visitors to the UK to pay for the cost of healthcare [light is dawning – the suggestion is that sometimes a how-to approach to documentation can be helpful, but this is hardly a new suggestion].

Not all verbs are equal [true, but then nobody said they are]

What Verb/s [verbs?] work for users will depend on what your user wants to achieve, but [and] also on how much they know about what government might be able to do for them [and myriad other factors]. 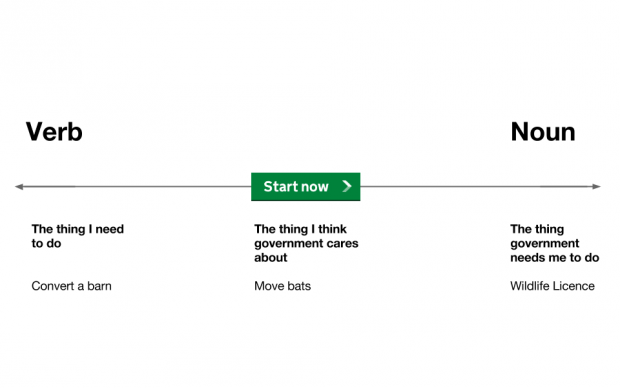 [What the government needs the user to do is to apply for a Wildlife Licence, just as much a mixture of nouns and verbs and prepositions and articles as "convert a barn"]
Where your service [verb] starts
Often a user’s perception of what government might be able to do for them is so low that they will skip straight to the noun that they think applies to them [How often? If it's the right noun, that's not a problem].
Our job is to intercept that process. [GDS wants to ban skipping as well as nouns?]
Equally [?] there are things that a user will not presume [then the user will usually be correct] to exist as a single service [verb].
Our job is to understand how that overall task breaks down into smaller tasks a user identifies as something they need help with [hard job].
To add to this, there will be many different users, with many different tasks that will run through a service [verb] that serves many different needs [people are difficult, computers are a lot easier, ...] - like a licence - so a service [verb] might have many different starting points as a user becomes more experienced or their needs become more specific [... they just won't stand still].

Verbs will change the way your service [verb] works [isn't there a bit more to changing services than that?]

In a world of easily shared government as a platform [so not in the UK], services [verbs] will be cheaper and easier to make. When that happens there will be more services [verbs], more closely targeted at user needs.
Service [verb] failure, and the calls and casework associated with it, will remain one of the biggest costs in government [how big?] - and for users - unless we change the way that we work to reflect the needs and language of users.
This isn’t going to be easy. It will mean massive changes to the way that our services [verbs] work as the verb/s [verbs?] we choose to describe them gradually affect what it is they do, but without it we will continue to provide services [verbs] made for a world that no longer exists [dentists are no longer needed?].
We've uploaded the poster shown in the picture above as a PDF. Feel free to download it and spread the word.
Posted by David Moss at 14:40