Two months ago on 22 June 2015 Louise Downe published Good services are verbs, bad services are nouns on the GDS design notes blog. Her point? Apparently "verbs will change the way your service works".

Ms Downe is the Head of Service Design at the Government Digital Service (GDS) and considerable effort was put into divining what she meant. To no avail. It remains unclear what her advice is how to improve the design of government services.

Service patterns, she tells us, are "consistent (but not uniform)" standards that "will provide better interoperability between services, meaning that we can more easily join them up across government" and they will give government "a way to know how to provide a particular type of service well". Also, "service patterns will be our instruction manual for using platforms and registers to build better services".

Service design is important. What does the UK criminal justice system (CJS) need? The answer was given on 18 August 2015 by Public Servant of the Year ex-Guardian man Mike Bracken CBE CDO CDO, executive director of GDS and senior responsible owner of the pan-government identity assurance programme now known as "GOV.UK Verify (RIP)": "It needs a good dose of proper service design thinking".

To that end, a multi-disciplinary team has been assembled to examine the CJS which shows that "digital people, technology, and thinking could transform the justice system". How does it show that? The team drew "a map of the entire criminal justice system". What's more, "this is something that's not been done before":

Mr Bracken couldn't be more wrong in this instance. It's been done thousands of times. Search Google for "criminal justice system flowchart" and you get about 157,000 hits. Click on "Images" and you can see as many maps as you like including this one, for example: 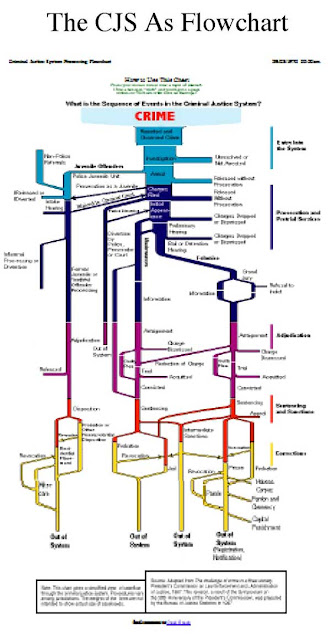 You can see the multi-disciplinary team's map but you can't read it. Even the bigger version is illegible. It's impossible as a result to tell whether the team have delivered on Mr Bracken's promise and re-designed the service to replace the present alleged mess which is the UK's criminal justice system.

While casually debunking the efforts of thousands of law-makers, lawyers and public officials over the centuries – "it was never actually designed" – it seems that it is Mr Bracken's team who have failed to design anything.

They haven't converted the CJS from a noun to a verb. There is no sign of a service pattern, whatever a service pattern is. The one innovation Mr Bracken lays claim to is that the latest map omits mention of any "organisations or government departments. That’s because that's not how users see the system". Says who?

Ignoring the distinctions between government departments is a conceit of the GaaP School. According to Mr Bracken, what would government without departments look like? How would it work? He hasn't told us.

Instead, he has announced his resignation and the government departments will have to soldier on as best they can without a Bracken – "he admits he is tired, and seems worn down by the demands of the job". That's what Computer Weekly magazine tell us in a long report of an interview with him conducted by the editor.

The media feed us a daily diet of cybersecurity breaches. Everyone knows that digital services are not secure. GDS are promoting digital public services. That looks tantamount to luring the public into danger. Despite its great length, there is no mention in the interview of security.

What Mr Bracken did tell the editor is: "It is a matter of fact, not opinion, that despite spending over £6bn a year on technology, digital and associated operations, there isn't a government service [developed by a department] that could be considered as a platform, as in that it works for all parts of government. That is a matter of fact".

No, it's not. It's not a matter of fact. As a matter of fact, we have had the Government Gateway system, a platform which works across all departments, since the turn of the century. It was developed by the Cabinet Office and has been subsequently maintained by the Department for Work and Pensions. For Mr Bracken to ignore it is once again to debunk the efforts of his colleagues.

Talking about his four-and-a-half years at GDS, Mr Bracken says "for most of this period, digital has not been an institutional challenge. Now it is". In fact, life in Whitehall did not start with the birth of GDS, Whitehall was digitising where it could for 60 years before GDS existed and digitisation remains a challenge despite the gift of four-and-a-half years of GDS. "We, as a group of public administrators, have confidence we can create digital public services – that just wasn't there when I came". Yes it was.

"We've delivered billions of pounds of savings". Mr Bracken's numbers have turned out to be wrong before. Let's wait to see what the National Audit Office say about the value of savings made thanks to GDS.

Francis Maude, Sir Gus O'Donnell and Sir Jeremy Heywood all called for a revolution in Whitehall. All gave it their active backing through the establishment and subsequent support of GDS.

Perhaps "transformation" is a more appropriate word in this case. The UK would not benefit from a revolution but we could certainly do with a major transformation of public administration.

"We have shown we have a track record of delivery". No. Despite all the support they have received, transformation has not been delivered by GDS. It will take time and dedication. Too much time and dedication for Mr Bracken, who after a mere four-and-a-half years is off to work for the Co-op three days a week.
Posted by David Moss at 02:26