Cast your mind back seven months to 27 March 2015 and an interview given to TechRepublic magazine's Alex Howard by ex-Public Servant of the Year ex-Guardian man Mike Bracken ex-CDO ex-CDO CBE, ex-executive director of the Government Digital Service (GDS) and ex-senior responsible owner of the pan-government identity assurance programme now known as "GOV.UK Verify (RIP)".
Mr Bracken was the government's chief data officer at the time, that's one of his CDOs, and Mr Howard was trying to find out what a CDO does.

And the solution? These registers must become canonical: "We need to make decisions about what registers and data are canonical, and we need to work out some basics, like what an open address format should look like [?]". 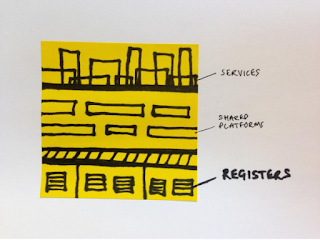 Once our registers are canonical, as you know, the economy will grow like topsy and public services will become efficient and trusted and green. But before that could happen Mr Bracken left Whitehall and now it's all eyes on Paul Downey, a Technical Architect at GDS.

We've got a few platforms, according to GDS. The award-winning GOV.UK, for example, is the government's publishing platform. GOV.UK Verify (RIP) is the government's identity assurance platform. There's a government performance platform with 801 dashboards all blaring numbers at you that may or may not measure the performance of public services. And even as we speak a government payments platform is taking its first tottering steps from discovery to alpha.

So we've got some platforms, but what about registers, and are they canonical?

The digital platforms we’re building, led by the brilliant GDS, will depend on strong data foundations.
This is important. Data-driven government depends on the answer. At least that's what Matt Hancock says. And he's the Cabinet Office Minister.

Let's see if we can get ourselves a data-driven answer by turning first to GDS's latest and sixth lack of progress report on GOV.UK Verify (RIP), Government services using GOV.UK Verify [RIP] - November 2015 update.

Table 1 shows the digital government services currently using GOV.UK Verify (RIP). All 13 of them. Is that an "authoritative list you can trust"?

You'd hope so, but the list includes DEFRA's digital claim rural payments service and that doesn't exist. DEFRA and GDS between them couldn't make it work and UK farmers are now using a manual system to claim their Common Agricultural Policy payments. The list also includes HMRC's digital marriage allowance transfer service and people were having trouble using that service because they couldn't register with GOV.UK Verify (RIP).

So is the authoritative number of government digital services using GOV.UK Verify (RIP) 13 or 12 or 11?

One sure-fire way to find out is to check the performance platform for GOV.UK Verify (RIP). If Mr Downey is to be believed, that platform must depend on an authoritative canonical register you can trust.

Take a look. Under "government services", the GOV.UK Verify (RIP) dashboard includes all the services which use it. All 8 of them. Including DEFRA's claim rural payments service. So maybe that should be 7. Either way, it's not 13 or 12 or 11. It's not authoritative. And it doesn't inspire trust. It may be a register. But it's not canonical. And if Mr Hancock is pinning his hopes for data-driven government on "the brilliant GDS" who are responsible for this unfortunate state of inequalities, then he's in a minority of one, and falling.
Posted by David Moss at 19:50