On the London Underground/Metro/Subway a recorded message tells us all, over the public address system, to "mind the gap". That's the gap between the train and the platform, of course, which we are all supposed to be too stupid to mind unless we're reminded.

There once was a post-nuclear holocaust film the name of which entirely escapes DMossEsq in which empty trains continued to travel the tube system following their programmed timetable, stopping to open their doors at each appointed station and the only voice heard was the PA system mindlessly repeating "mind the gap". 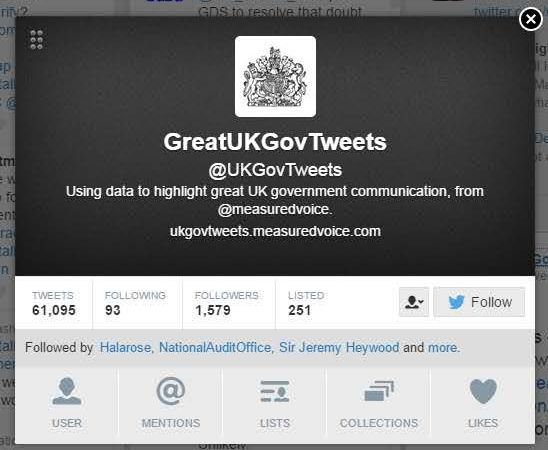 Day in, day out, @UKGovTweets promotes the best tweets emitted by members of the administration. It's an automated flattery service. It saves human bootlickers the effort of doing the job themselves.

Here are some examples:

They're not all that great really, are they. By "great", the robot Twitter account probably means that there has been lots of "engagement". Which isn't what any human means by "great".

That's one problem with this dim form of artificial intelligence.

The other problem is that Mike Bracken hasn't worked for the government since 30 September 2015. However great they may be, his tweets shouldn't be included in the GreatUKGovTweets universe. They are not instances of "UK government communication".

But the robot hasn't been updated. It's still saying "mind the gap" even though there's no-one left any more to mind the gap.

There's a little parable for you. If, like the Government Digital Service, whose executive director Mike Bracken once was, you believe in digital by default and government by the internet and you find the notion of human intervention in public services anathema, then a gap will instantly open up between the digital records and reality. The computerised services will become instantly useless.

It's a year since Mr Bracken left Whitehall.

It's 4½ months since the post above was published. Since then Mr Bracken has been congratulated 22 times for "writing a great UK gov tweet". That's 22 more artificial intelligence mistakes.

The real UK government should step in and stop this Twitter account's nonsense. 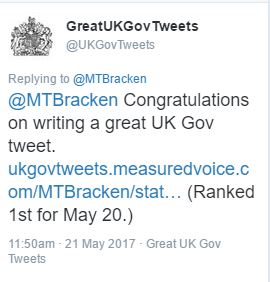 ... despite the fact that he doesn't work for the UK government.

Not only that but @UKGovTweets is not the UK government. It is Measured Voice.

Or at least it was but now: "Measured Voice is no longer in service ... Please contact info <at> measuredvoice.com if you need further assistance. — The Team".
Posted by David Moss at 19:57