The system is not set up to do stuff.
It’s set up, frankly,
to have an intellectual pissing match
around how its things should be.
Mike Bracken on Whitehall
On 1 August 2016 one man replaced another man as head of the Government Digital Service (GDS). Kevin Cunnington came. Stephen Foreshew-Cain left. People come and people go. It's not unusual but on this occasion there was an exorbitant keening and wailing and moaning from an international class of banshees.

One minute GDS was Icarus, then Dreyfus, then Turing. How long before St Sebastian makes an entrance? "Hyperbole? No" (Derek du Preez, banshee).
What was all the fuss about? GDS's staff of 700 (Helen Margetts, banshee and GDS advisory board member?) have been promised £450 million to spend on unspecified government IT projects between now and 31 March 2020.

That looks quite confidence-inspiring, you might think, but the banshees fear that the organisation will (a) be closed down or (b) have its terms of reference changed.

Suppose the nervous banshees are right. Suppose that (a) or at least (b) is about to happen. So what? The banshees are surprisingly bad at explaining why that would be a disaster. What are they so upset about?

"Recently my car's tax had run out ... In the bad old days, renewing your tax disc was that special kind of hell – government hell. Filling in forms, finding obscure bits of paper ... and then queueing for the duration of the Pliocene epoch at a post office ... But online it took but minutes ... That service was just one of many built in part, or full, by a quite remarkable team, the world-beating Government Digital Service ..." (Ben Rooney, banshee).

Car tax cannot be the reason for Mr Rooney's banshee distress. Maybe it's more about money? Mr Rooney adds: "the team ... has saved the taxpayer £4billion in direct costs and an almost incalculable amount in indirect costs".

What are we supposed to do with "almost incalculable"? Useless.

GDS have a poor record with figures. They're not good at them. Not comfortable. It's not their thing. 4%. 0.6%. What's the difference?

The National Audit Office (NAO), whose job it is to audit government accounts, noted back in March 2013 that "the GDS has estimated total potential annual savings of £1.7 billion to £1.8 billion ..." (para.1.5) and "we have not audited the estimated savings" (para.1.6).

These estimated savings are supposed to be made by reducing headcount. 1½ million public servants should be made redundant. That's the idea behind GDS's Government as a Platform strategy (GaaP).

"We have seen little evidence that departments are making the expected savings"? Scepticism is the order of the day ...

... even when it comes to Stephen Foreshew-Cain's October 2015 blog post, How digital and technology transformation saved £1.7bn last year. Her Majesty's Treasury warns readers that: "These savings figures are not national or official statistics: they are based on management information evidence in department reports and other supporting evidence". 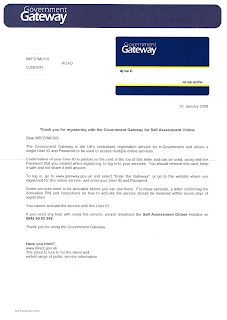 Let's leave Mr Rooney and Ms Margetts doing their further research for a moment and look at Mr Foreshew-Cain's claim that "85% of self assessment filing is done through online channels". He's talking about self-assessment for UK income tax.

Like the car tax example, it should be noted that this is little or nothing to do with GDS. Her Majesty's Revenue and Customs (HMRC) got on-line self-assessment up and running years before GDS existed, please see the January 2008 Government Gateway/self-assessment letter alongside.

The Government Gateway has been operating in the UK since 2001. HMRC collect all Value Added Tax (VAT/sales tax) returns on-line using the Gateway. Ditto company returns for Pay As You Earn (PAYE/income tax) and National Insurance (social security). Ditto all Corporation Tax returns. They have done for years. It's nothing to do with GDS.

By the same token, when Mr Foreshew-Cain says that "over 98% of driving tests are now booked online" he may well be right but it's got little or nothing to do with GDS. It's DVLA again, the Driver and Vehicle Licensing Agency, the same people who've been collecting car tax on-line for 10 years.

À-propos, Mr Rooney believes that "... thanks to the GDS, the UN ranked the UK best in the world in the 2016 E-Government rankings". Nowhere in their 242-page report do the United Nations say that.

Talking of GDS, Mr Rooney suddenly remembers "heck, it even won a design award – and when did any government IT project anywhere in the world ever win a design award?". Charmingly folksy, it obviously doesn't hurt to win an award but it doesn't help either. How does winning an award help the Exchequer or the British people? How does it help to prove that GDS shouldn't have its terms of reference changed three years later? Or that it shouldn't be terminated for having achieved little or nothing since then?

"So successful has the GDS been that the Obama administration shamelessly copied its playbook for its own US Digital Service, as did the Australians". It is only sensible to copy GDS's "playbook" if GDS has been "so successful". And so far, Mr Rooney has failed to demonstrate that it has been.

Anyway, who's copying whom? GDS's identity assurance scheme is a copy of the US's NSTIC, the National Strategy for Trusted Identities in Cyberspace. And GaaP was dreamed up by the US's Tim O'Reilly (banshee).

Mr Rooney sagely reminds us that "bad IT ... erodes trust and harms democracy". What about GDS's agile failure with the Rural Payments Agency? That was bad IT. What about the failings of its application to register to vote system? Or the student loans system?

Above all, what about GOV.UK Verify (RIP), GDS's failed identity assurance system? Years late, privacy-destroying, insecure and still not working, what is there to choose between GDS and any other systems integrator with guaranteed government work?

We have concentrated on Mr Rooney's keening because it is the most complete set of whinges but the same criticism applies to all the banshees – they can't make the reader understand what's so heroic about GDS. Or why they're moaning so much about changes at GDS. Hyperbole, Mr du Preez? Yes.