Public administration in the UK has problems which could be solved if public services became digital by default. That is the raison d'être of the Government Digital Service (GDS).

Digital by default? What does "digital" mean? According to Tom Loosemore, ex-Deputy Director of GDS, "digital means applying the culture, practices, processes and technologies of the internet era to respond to people’s raised expectations".

The reactionaries in Whitehall have hobbled GDS. That's what Jerry Fishenden and Cassian Young say: "It is convenient for institutionally conservative managers to watch the energy behind transformation dissipate harmlessly in the sandbox where the agile insurgents are left to play with their websites", please see Escaping waterfall government and the myth of ‘digital transformation’.

Messrs Fishenden and Young accept Mr Loosemore's questionable prescription. They think GDS have failed to deliver. But they still think it's the right objective – the model for public administration should be changed radically just as "Netflix, Flickr and Airbnb" have changed the dynamics of their markets.

Sir Tim Berners-Lee, inventor of the web, has serious reservations, please see Tim Berners-Lee says privacy needs fixing – and calls for 'algorithmic transparency'. The culture of the internet era has blemishes: "over the past 12 months, I’ve become increasingly worried about three new trends, which I believe we must tackle in order for the web to fulfill its true potential as a tool which serves all of humanity":
Embrace the culture of the internet era – as Messrs Loosemore, Fishenden and Young want you to – and as things stand, Sir Tim warns you, you lose control of your personal information. That's how Facebook came to report $27.6 billion of revenue for 2016. That's how Google (Alphabet) came to report revenue of $27.1 billion, not for the whole of 2016, just for the fourth quarter.

Sir Tim is working on a project called Solid to try to "decouple data from web applications (and by extension social networks) so that users can decide where their data resides and how it can be accessed". It might work. We'll see in five years.

In the meantime, any promises to put you in control of your own personal information are false. The Privacy and Consumer Advisory Group (PCAG) is co-chaired by Jerry Fishenden. PCAG insist that any identity assurance scheme should put the user in control. GDS promise that their GOV.UK Verify (RIP) identity assurance scheme complies with PCAG's principles. That promise is false. The inventor of the web says so and he should know.

While claiming to put the user in control, GDS like us to spray our personal information all over the world when we register with GOV.UK Verify (RIP). Their heart really isn't in this privacy lark, is it. They use Eventbrite to organise events. They use Zendesk for user support. They use StatusPage for network monitoring. They use Survey Monkey for user feedback. All the personal information involved is stored and used beyond your control and now GDS want you to upload your CV to Jobvite.

Take a step back.

GDS have got a lot of situations vacant. For example, they were tweeting yesterday, saying: "We have a fantastic opportunity for a Lead Product Manager to work across the @GOVUKverify product teams https://jobs.jobvite.com/gds/job/oksV4fwv":

The Jobvite privacy policy is worth a read. Any problems and you can just write to them at:

No idea what that means, but the three companies are Mvine, SiteKit and Safran. An identity hub has a lot of data pass through it and needs to store that data to provide an audit trail. Are they fit companies to provide identity hub services? No idea.

It will take a lot of effort to conduct this GOV.UK Verify (RIP) test. The three companies will have an interest in its success. On cue, three days later, 3 April 2017, Government Computing publish You want my digital identity, I want something in return: "Approaching digital identity as a ‘this for that’ arrangement is the only way the private sector and Government can live in cyber harmony, argues Frank Joshi".

Frank Joshi is "director of Mvine Ltd , an established UK SME specialising in distributed digital identity technologies". "Cyber harmony" is not defined in his article.

The conclusion of Mr Joshi's argument is:
GOV.UK Verify (RIP) will only become a part of our everyday lives if we trust it. Mr Joshi has got it the wrong way round.

His argument rests on the fact that people hand over a lot of personal information to various private sector suppliers on-line, and we ought to be equally happy to hand it over to public sector suppliers: "So if it’s alright giving information about yourself to commercial firms, why not to those who provide public services?".

The Government Digital Service (GDS) have spent five years and more telling us that GOV.UK Verify (RIP) ensures that our personal information is not collected by the public sector. Instead, it is verified for the public sector by private sector "identity providers". That is the opposite of what Mr Joshi advocates.

"You see", says Mr Joshi, "as people we are willing to consent to certain organisations knowing certain things about us. And that’s perfectly reasonable and normal ... We divulge information about ourselves usually in a something-for-something exchange. Think of it as a 'this for that' or quid pro quo". You should expect to pay the right price for goods and services. Agreed. But what is the right price? Mr Joshi doesn't tell us.

Sir Tim Berners-Lee thinks we're over-paying, please see above. We're handing over too much personal information. Instead of tackling that issue, Mr Joshi goes on to say:
Don't know about you, but that looks pretty theoretical to DMossEsq. First "citizens are free". Then, next sentence, "we cede a portion of our freedoms". And next sentence "we cede a further portion of our freedoms". So we're not free according to Mr Joshi and presumably he was just kidding when he said we are.

The bulk of Mr Joshi's article lists cases where we already manage to use on-line services. So why do we need GOV.UK Verify (RIP)? He doesn't tell us.

DMossEsq readers, of course, will have watched the video last November when it first appeared on our CretinNet (26.11.16) service.

Our personal information is said to be safer because GOV.UK Verify (RIP) doesn't store it all on a central database.

The parting shot on the video is a claim that GOV.UK Verify (RIP) keeps our personal information and our identity secure. What does "secure" mean here? Shared with all and sundry anywhere in the world out of our control? 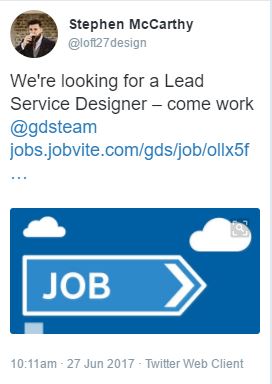 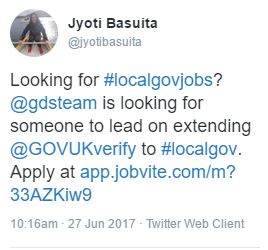 GDS continue to invite job applicants to send their CVs to Jobvite, please see the two tweets alongside, emitted this morning.

And they continue to define "digital" as the embrace of the "culture, practices, processes and technologies of the internet era" even when we learn, as we did this morning, Google hit with record antitrust fine of €2.4bn by Europe: "The regulator found that Google had abused its market dominance as a search engine ...".

Later today we learned that Petya cyber attack: Ransomware spreads across Europe with firms in Ukraine, Britain and Spain shut down: "In Ukraine, government departments, the central bank, a state-run aircraft manufacturer, the airport in Kiev and the metro network have all been paralysed by the hack ... In the UK, the advertising firm WPP said its systems had also been struck down, while in the Netherlands a major shipping firm confirmed its computer terminals were malfunctioning".

That definition of "digital" – it needs to be improved. Its faults are evident but GDS never change. They never learn.

That's a lesson for local government. A lesson they've already learned. More than half of the local authorities who started trials of GOV.UK Verify (RIP) have pulled out.

What kind of recruits will be attracted to these two vacant situations at GDS? Who wants to work for an organisation that can't learn?

It is three months since Mvine hove into view, please see above.

Mvine are supposed to demonstrate that people can use GOV.UK Verify (RIP) to access private sector services even if they can't use the wretched system to access public services: 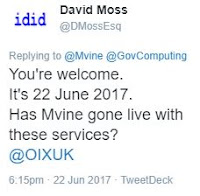 That's what it said on the Mvine website when DMossEsq took a copy on 22 June 2017: "Mvine aims to go live with these services from June 2017 onwards".

Take a look now, and the reference to June 2017 has disappeared.