Last Wednesday, 3 May 2017, Jerry Fishenden published a blog post, The canary that ceased to be, where he announced his resignation as co-chair of the Privacy and Consumer Advisory Group (PCAG):
PCAG is meant to be a safety device like a miner's canary, it's meant to detect officials attempting to "smuggle their often half-baked proposals past Ministers". That's what it's meant to do and that's what it does but ministers have stopped paying attention. Particularly Matt Hancock and Ben Gummer who haven't bothered even to acknowledge letters sent to them by PCAG.

The "disappointingly amateurish and technically-illiterate" Digital Economy Act was the last straw. Mr Fishenden had to resign. PCAG's advice was "repeatedly ignored by officials who should know better" and those officials "repeatedly misled and misinformed" PCAG. 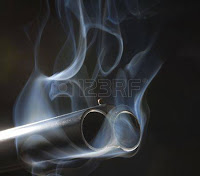 No doubt honest and able people like Mr Fishenden resign all the time, infuriated by official mendacity and incompetence, but it's rare to see them speak out like this ...

... and rarer still to see them loose off another shot a day or two later, please see Gov.uk Verify and identity assurance - it's time for a rethink, in which Mr Fishenden confirms and amplifies DMossEsq's contention that GOV.UK Verify is dead, RIP.

Who knows but there may be yet more to come.

When Jerry Fishenden gave evidence last October, one member of the Digital Economy Bill Committee said: "Dr Fishenden, your exasperation with what is in the Bill is shared by other witnesses".

The Digital Economy Bill has now been enacted and given royal assent. It is a dreadful piece of legislation and it seems to have been the final straw for Mr Fishenden.

"In Francis Maude’s day, the problems with Part 5 (PDF) of the Digital Economy Bill and its associated codes of practice would have been highlighted and fixed with the help of the [Privacy and Consumer Advisory Group], rather than causing Ministerial embarrassment and confusion when they were published in a disappointingly amateurish and technically-illiterate state", says Mr Fishenden in his canary article.

The same claim is repeated by Diginomica*: "Not for the first time, diginomica laments the loss of Lord Maude". And by Campaign4Change: "Fishenden’s departure is further confirmation that since Maude’s departure, the Cabinet Office – apart from the Government Digital Service – has settled back into the decades-old Whitehall culture of tinkering with the system while opposing radical change".

This is not what it looks like from the outside. Francis Maude is on record as saying: "I want to bust the myths around the complexities of data sharing ... we aim to find effective ways of using and sharing data for the good of everyone".

He wanted the government to "deliver more effective, joined-up and personalised public services, through effective data-linking", which he said was not the same as "data-sharing" but he never explained the difference ...

... reminiscent of the Dark Department's (the Home Office's) Paul Maltby, who tried to make the ethical problems of data-sharing go away by changing the name to "data access".

From the outside, to the public, it looks as though Mr-now-Lord Maude was part of the personal information problem, and not the solution.

In his Verify article, Mr Fishenden points out that the Government Digital Service's GOV.UK Verify (RIP) identity assurance scheme stands many of GDS's principles on their head. True, but don't forget, it was designed and developed while Lord Maude was GDS's political boss.

Mr Fishenden's suggestion that the problems of the Digital Economy Act and GOV.UK Verify (RIP) would have been solved if only Lord Maude was still Minister for the Cabinet Office is a baffling distraction from the main point, which is the "half-baked proposals" of "disappointingly amateurish and technically-illiterate" officials who "repeatedly misled and misinformed" the Privacy and Consumer Advisory Group.

Notes
* "The loss of Lord Maude"? It should be made clear that Diginomica are not suggesting that Lord Maude is dead, simply that he is no longer Cabinet Office Minister.

"Who knows", we said, back in May, please see above, "but there may be yet more to come".

"What review?", you ask. The McKinsey review. Manzoni calls in McKinsey to conduct review of online identities for public services. That was David Bicknell's scoop, writing on the Government Computing website nine days ago: "The review ... is believed to have been instituted by Civil Service chief executive and Cabinet Office permanent secretary John Manzoni".

900 staff in the Government Digital Service (GDS), all supposed to advise the rest of the civil service how to be innovative and effective in public administration, and the CEO has to call in external consultants to advise on the central pillar of digital-by-default, GOV.UK Verify (RIP)? It's not a good look, is it.

As do we all, Mr Fishenden wants to help McKinsey with their review. Thus his excellent Computer Weekly article.

It's a long article. What it says is that GDS have been wasting our time and theirs with GOV.UK Verify for six years. RIP.

They're all good questions. 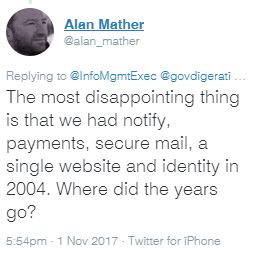 Many of us have been asking the same questions for years.

It's quite boring repeating yourself. Why the need to repeat ourselves for years at a time?

Do they know the answers? Or are they lost, in over their heads, overcome, submerged, helpless, drowning, rudderless, confused, in need of help, "not up to it" (© Clement Attlee), baffled, over-promoted, out of ideas, stymied, inhibited, directionless, broken down, demotivated, demoralised, guilty, truculent, nervous, defensive, ...?

If people have good answers, they tend to tell you.

The first cut is the deepest. The longer this head-in-the-sand psychopathology is allowed to fester, the more traumatic the eventual confession will be.
Posted by David Moss at 00:42