You may have mercifully forgotten all about midata.
Well bad luck, because midata excitement is about to sweep the nation.
23 May 2013: "Hi I’m Dan, Director of the midata Innovation Lab, part of the midata voluntary programme. I wanted take this opportunity to share my vision for the lab, or mIL as we call it", said Dan Bates, who is gamely Working with business to fan the flames of innovation.

Only three weeks later, 13 June 2013: "I'm Richard and I chair one of the expert working groups looking at what we need to do to ensure that consumers can be confident when they allow their data to be passed to and used by third parties", said Richard Koch, the man in charge of Authentifying [sic] customers and their representatives.

Two weeks later still, 27 June 2013: "Jo Swinson, Minister for Employment Relations and Consumer Affairs, talks about the Government’s midata programme". That's what it says in Minister for Consumer Affairs talks about the UK Government’s midata programme, followed by a 90-second video of Jo Swinson telling us that thanks to midata, for the first time, we'll get bank statements, as though we've never seen one before.

Mysteriously, that video has disappeared, so that if you click on the link, what you get now is no-one talking about midata.

Next day, there's a salvo on Twitter from Dan:


The unbearable tension in the coiled spring that is midata looks like being released tomorrow, 4 July 2013.

That's when the midata Innovation Lab will be unveiled and presented to a hungry public.

What should we expect?

It's all laid out in a charming little cartoon that even you can understand, Video introduction to midata innovation lab: 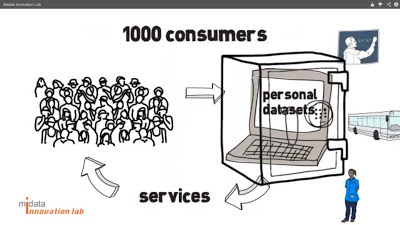 All Dan's asking is for 1,000 extraordinary people to give him all their bank account data, gas and electricity bills, and mobile phone usage records. He will then add all their educational records, culled from Nigel Shadbolt's Open Data Institute, all their health records and any travel records he can find and, while keeping your data completely safe, he will give the whole lot to some innovative flame-fanning app developers you've never heard of to develop services which you will find it impossible to live without although quite what those services are likely to be is anyone's guess except to say that they will "empower" you and boost the economy.

You may be a bit worried by all the risks with midata identified by Which? magazine/The Consumers' Association. The cost of accreditation and regulation, the opportunity for fraud, the loss of privacy, and so on. You shouldn't be – you can rightly feel "confident", as Richard says, about this whole Innovation Lab business, the cartoon with the nice guitar music tells you that the midata Innovation Lab is full of nice people you can trust.

Nevertheless, if you don't feel that you personally can help Dan in his mission, don't worry, it's all "voluntary".

Equally, don't be selfish. Perhaps you could at least inveigle three or four of the more socially responsible people you know into volunteering their entire life history in this good cause.

They won't lose anything – as Jo Swinson told us in her disappeared video, their data will still "belong" to them. And Jo. And Dan. And Richard. (And Stephen. Forgot to mention Stephen. Also Stephan 'embrace the change' Shakespeare. And Craig – how could anyone forget Craig?) And Sir Nigel. And the app developers. And the NSA. And GCHQ. And anyone else with access to the cloud.


Updated 10.7.13
Somewhat late in the day, the Department for Business Innovation and Skills have issued a press release about the midata Innovation Lab, Businesses get creative with consumer data at the ‘midata’ Innovation Lab launch.