Time for someone to take the personal information economy seriously

"The roots of mail order date back to the middle ages. In 1498, Aldus Manutius of Venice, a publisher, brought out a catalog of 15 texts which he had published, which were precursors of the paperback books of today" – so says Bonnie Unsworth in her A Brief History of Mail Order Catalogs.

Rather more recently, "the real beginning of mail order was the result of the experiences of a traveling salesman in the mid west, named Montgomery Ward. He published a catalog sheet that listed 163 items right after the Civil War. Within two years, the catalog grew to 8 pages, and then to 72 pages. By 1884, the catalog contained 240 pages with thousands of items, almost everyone of which was illustrated with a woodcut".

While they had Montgomery Ward and Sears Roebuck in the US, here in the UK we had Great Universal Stores, always known affectionately as "GUS".

Mail order was big business and the philanthropic Sir Isaac Wolfson amassed a fortune at GUS. The Wolfson Foundation has awarded charitable grants worth over £1 billion since 1955.

Not just big business, mail order was a credit business. There was no point Mr Ward repeatedly sending the products they had ordered to people who didn't subsequently pay for them. Ditto Sir Isaac. They needed to know before despatch that a given customer wasn't too likely not to pay.

The Manchester Guardian Society was established as a credit rating agency in 1826 in the UK. 1897 saw the formation of the Merchants' Credit Association in the US. The Ramo-Wooldridge Corporation and Thompson Products merged to form TRW in the 1960s. TRW's leading light, Simon Ramo, predicted the cashless society as early as 1961 – enter the credit card. GUS created Commercial Credit Nottingham in 1980, injected TRW into it in 1996 and the whole lot became Experian.

Once you've collected a lot of data about a lot of people – including the UK electoral roll data which Experian picked up en passant – you can do a lot more with it than just calculate a credit rating. That's an important job, oiling the wheels of commerce, but you can also for example sell your data to political parties, seeking to identify floating voters and persuade them to come down on their side of the party fence.

You can help new and established businesses target their marketing. You can do demographic analysis. You can, famously, offer to help the Department for Work and Pensions to find benefit cheats.

And perhaps you can provide the basis for identity assurance, should some government want to make public services, say, digital by default.

That raises questions about the privacy of personal data and the security with which it is maintained. We seem to have quite good laws in the UK protecting that privacy and adequately ensuring the related security – laws which Experian and its UK competitors have a good record of obeying.

They have fewer data broking laws in the US. It is the desire to make good that omission that lies behind the work of Senator Rockefeller's Commerce, Science, & Transportation Committee which we alluded to the other day.

The UK's privacy laws are permanently under threat from attackers like Google, Facebook, Francis Maude (passim), the Health and Social Care Information Centre (care.data), Professor Sir Nigel Shadbolt (ODI, midata), Stephan Shakespeare (PSI) and the Government Digital Service (identity assurance). Not to mention the NSA, GCHQ and every other halfway competent intelligence service in the world. Among others.

Perhaps the walls of civilisation will withstand the siege. Perhaps they won't. Who knows.

One thing we do know is that there's nothing new about mail order or its descendants such as Amazon. Their history can arguably be traced back to fifteenth century Venice.

And there's nothing new about the market in personal data. It already has laws associated with it, suppliers like Experian, trade associations like the DMA, and marketing "gurus" wielding techniques that have grown up over several decades, if not centuries.

"Not very well informed"? What do these people think Google and Facebook are and always have been if not very well informed data brokers?
Unknown to whom? Everyone else seems to know that the market is already operating. There are over a million apps already available on Google Play, for example.
Google has detailed records of the preferences of everyone who uses the web. Facebook has more regular monthly users than the population of most countries. Amazon operates the biggest cloud services business in the world. The banks – necessarily – record our every financial transaction. The mobile phone network operators – necessarily – continuously record our location, accurate to the nearest few metres, wherever we are in the world. Not just our location, but who we call and who calls us. "The entire NHS hospital patient database for England was handed over to management consultants who uploaded it to Google servers based outside the UK". HSCIC want to do the same with our GP health records. "A bit of a landgrab"?

No doubt Sir Martin Sorrell's people will be happy to come up with another name for Mr Auwera.

Professor Sir Nigel himself is supposed to have said "Everybody is going to be a sensor" at PIE2014, and "Any friction is an impediment; additional steps destroy uptake". Once you're in this childish milieu it's probably hard to resist joining in, the frivolity is catching ...

.. but he's not naïve or commercially unaware and he must somehow make people realise that the personal information economy is not some new hippy commune in which people can witter on about "uncanny valleys" and "trust serums". It's a mature and rich market with political power, a market in which people are bartering their personal data for "free" web-based services.

The pretence is that these services "empower" us in some hippy sense of the word. Once all our data has been sucked up into the cloud, once we are all utterly dependent on these services, let's see just how long they continue to be offered free at the point of delivery and how long it takes for the new empowerment to turn into a more traditional subjection.

We have already got to the point where the Pied Pipers can ring up the President of the United States of America to tell him to get out of the way, please see Mark Zuckerberg tells Barack Obama he is 'frustrated' over US government surveillance. And the President accepts the call.

Professor Sir Nigel's colleague at Southampton University and at the Open Data Institute, Professor Sir Tim Berners-Lee, seems to be a certified member of the commune:
There doesn't seem to be anyone else. Unless he really does want people to become no more than sensors, feeding data back to the Google brain, it's up to Professor Sir Nigel to forswear meretricious phrase-turning and to devise a serious response.

There we were four years ago saying that a credit referencing agency can analyse and sell its "data to political parties, seeking to identify floating voters and persuade them to come down on their side of the party fence".

It was entirely uncontroversial ...

... until it was suggested that Donald Trump won the US presidential election thanks to Cambridge Analytica and that Leave won the Brexit referendum thanks to ditto.

And Equifax? They lost the personal information of 145 million people. 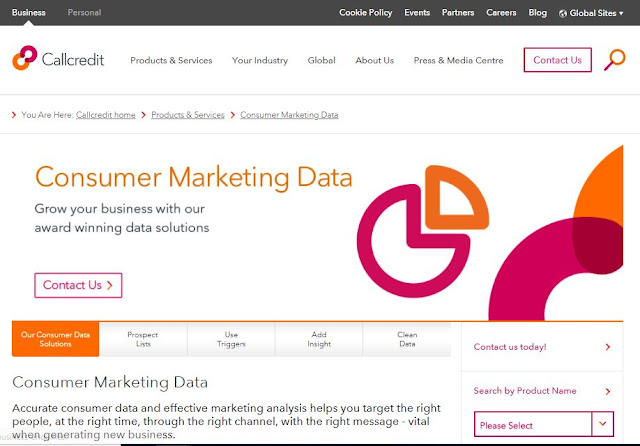 Would you say "I don't mind Cambridge Analytica having my personal information"? You may well be perfectly happy with that ...

... but if not, why is it more acceptable for Experian to have your personal information, or Equifax or Callcredit?

Time was when we all knew that the key to winning general elections was social media. Both of the main UK political parties tried. Their supporters wished them well. "May the best man win", as we used to say. No more – Emma's Diary fined £140k for flogging data on over a million new mums to Labour Party:
A loss of innocence?

A return to adulthood.
Posted by David Moss at 17:36