The Law Commission: "Verify does not currently ensure that the person entering the information
is in fact the person he or she is purporting to be;
rather it focuses on verifying that the person exists" (para.6.67/p.119)
A week ago we learnt that people with a German electronic ID are now able to use it to log on to HMRC: 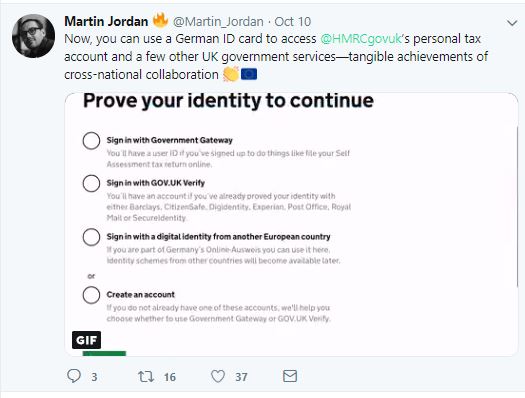 This has been on the cards, so to speak, for over 10 years now, ever since the inception of the European Union's Project STORK. German students studying at UK universities should be able to access UK public services while they're over here using trusted German identity assurance. Ditto UK students in Germany. And not just Germany and the UK, any EU citizens in any EU country.

Over the years, Project STORK became eIDAS, EU Regulation 910/2014. The German Federal Office for Information Security jumped through all the eIDAS hoops to "notify" their Ausweis identity assurance scheme, it's passed all the tests and, as noted in the Martin Jordan tweet above, Her Majesty's Revenue and Customs now have to accept Ausweis identities.

In practice, this is the response a German currently gets: 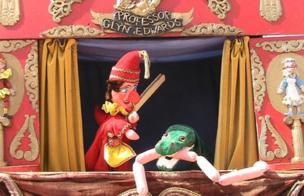 Apparently not. The error message is branded GOV.UK Verify (RIP). Their logo. Their problem.

Speaking of which, GOV.UK Verify (RIP) has been put up for eIDAS membership. It's been "pre-notified" in the lingo: 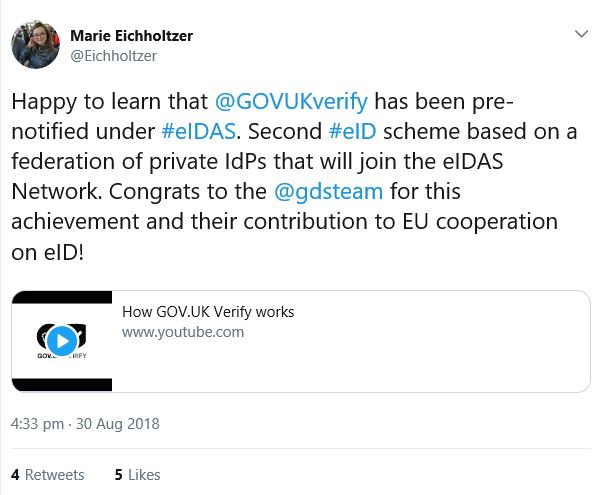 Our EU partners will not be impressed at the rejection of GOV.UK Verify (RIP) by HMRC, DWP (para.3.21), the NHS, Scotland, UK local government and others. Nor will they be mollified when they see US NIST's opinion that GOV.UK Verify (RIP) provides nothing better than self-certification.

It's all about trust, and what are our partners supposed to make of the fact that the Post Office are treated as an "identity provider" (IDP) even though they're not certified by tScheme? It looks underhand making people think they're dealing with the Post Office when really all the identity proofing work is carried out behind the scenes by Digidentity. It undermines trust.

No-one knows. Certainly not the 27 other members of the EU.

As things stand, the probability of GOV.UK Verify (RIP) getting through the eIDAS vetting procedure is not high, not substantial but, if it's lucky, maybe low. Low-to-non-existent.

Our European partners may recall that early last month the UK's Infrastructure and Projects Authority recommended that GOV.UK Verify (RIP) be terminated. That's the same GOV.UK Verify (RIP) that we're trying to get approved for use in eIDAS, please see above.

During the handover to the private sector two of those "identity providers" are dropping out – CitizenSafe/GB Group plc and the Royal Mail.

In reality, the Royal Mail was never a true "identity provider", they just provided a call centre service and all the identity proofing and verification work done in its name was really conducted behind the scenes by CitizenSafe/GB Group plc, another example of GDS's duplicity like the Post Office/Digidentity charade, please see above.

Come to that, what's happened to all the personal information Verizon amassed while they were an "identity provider"?

Even for the continuing "identity providers" – Barclays Bank, Digidentity, Experian, the Post Office and SecureIdentity/Morpho – GOV.UK Verify (RIP) doesn't abide by a single one of the identity assurance principles that are meant to govern it.

Certification of the GOV.UK Verify (RIP) services supplied by "identity providers" is carried out by tScheme. The summary of their certification has now been updated.

The Post Office is most notable as the only "identity provider" to have no tScheme approval whatever.

None of the "identity providers" is certified by tScheme as having any expertise with digital certificates – something of a gap vis-à-vis eIDAS, which is all about trust services.
Posted by David Moss at 15:36