We have seen how users of GOV.UK Verify (RIP) who registered with Barclays and the Post Office may find it impossible to access public services. 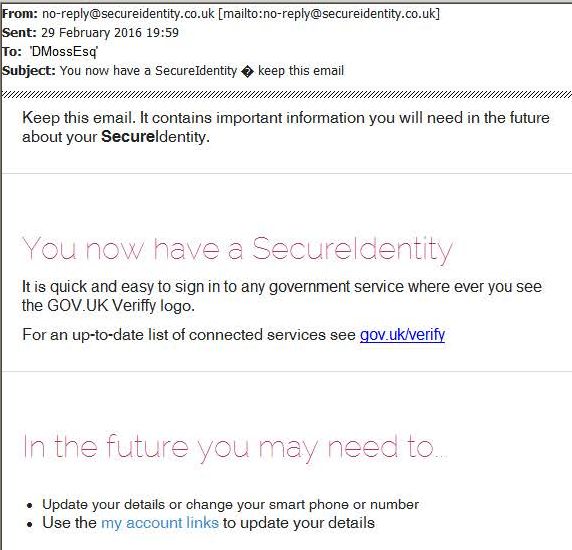 As you can see, back in February 2016 DMossEsq managed successfully to register for GOV.UK Verify (RIP) with Safran Morpho/SecureIdentity.

Day in, day out, for months now, since at least 12 April 2016, Safran Morpho/SecureIdentity have suffered the humiliating indignity of being fingered by GDS as useless: 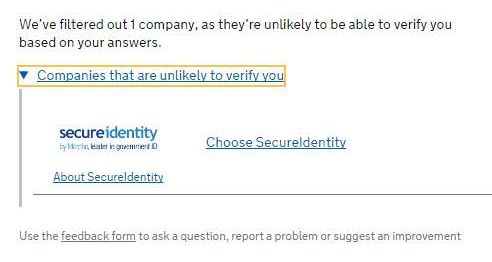 Quite why Safran Morpho/SecureIdentity put up with this astonishing behaviour is unclear.

Like the Post Office, Safran Morpho/SecureIdentity is not properly a certified company. They were supposed to be certified by tScheme by May 2016, but it's never happened. When GDS tell you that all their "identity providers" are certified companies, they're wrong: 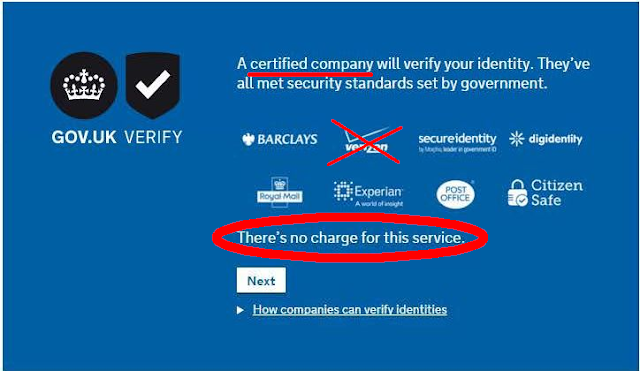 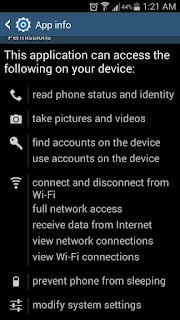 Why did he close the account? Because DMossEsq doesn't approve of downloading apps onto his mobile phone and Safran Morpho/SecureIdentity insist that you do.

You might as well deliberately install a virus – look at the functions Safran Morpho/SecureIdentity's app can perform on the mobile phone screen snapshot alongside.

Do you want Safran Morpho/SecureIdentity modifying your system settings? Or finding and using your other accounts?

No. This is utterly intrusive. And quite unnecessary for the job in hand – in this case, to look at HMRC's on-line self-assessment service.

Which brings us to the nine identity assurance principles promulgated by PCAG, the Privacy and Consumer Advisory Group. GDS repeatedly claim that they abide by these principles which are designed to guard our privacy. But they don't.

The PCAG identity assurance principles for GOV.UK Verify (RIP) are shown below in black with comments in red:

And it's not just Principle #6. GOV.UK Verify (RIP) flouts all nine privacy principles. It doesn't abide by a single one (6 May 2016 1). How GDS can claim that they do abide by these principles is a mystery.

That is what they say: "GOV.UK Verify [RIP] protects users' privacy. It has been designed to meet the principles developed by our privacy and consumer advisory group". But it's not true, is it.

Check the GOV.UK performance platform and you'll find that nine government services can be accessed using GOV.UK Verify (RIP). That's what GDS say. There are many qualifications that should be added to that claim of theirs.

Let's let that drop for the moment and instead note here that two more services are to be added to that modest list, please see GOV.UK Verify [RIP] welcomes 2 more DVLA services:
That looks like one service, not two, but don't let's cavil. Note rather this claim:
It does not follow from personal information storage being kept to a minimum that your personal information is safe and private.

Then there's this claim:
The US National Institute for Standards and Technology disagree. They say that GOV.UK Verify (RIP) offers relying parties like DVLA nothing more than self-certification. Spraying your data all over the world is all downside.

DVLA is the Driver and Vehicle Licensing Agency. GDS have driven a coach and horses through their identity assurance principles, please see main post above. The National Health Service don't think that GOV.UK Verify (RIP) meets the standards required for medical records. You might be well advised to listen to them.

"We’ve also talked about the Privacy and Consumer Advisory Group (PCAG)", GDS go on, "and one of their key outputs: the Identity Assurance Principles. These exist to inform and guide the privacy-related aspects of identity assurance, especially in GOV.UK Verify [RIP]". Agreed. That's the idea ...

... but of course it's our contention above that GOV.UK Verify (RIP) doesn't abide by the identity assurance principles. And that's precisely what GDS themselves demonstrate, at length, over the course of these three articles.

Take principle #8, for example, treated in Part 3: "If I have a dispute, I can go to an independent third party for a resolution".

What do GDS say?

"If a user wants to raise a complaint, then they can do so through the certified company’s user support". That's not an independent third party.

Also, "user support has the ability to share anonymised and statistical outcomes with the independent PCAG for further investigation, if required". But principle #8 says that you can go to an independent third party. That's not the same as GOV.UK Verify (RIP)'s user support team going to PCAG.

Does GOV.UK Verify (RIP) abide by principle #8? Manifestly, no.

Principle #9 is: "Any exception has to be approved by Parliament and is subject to independent scrutiny".

GDS may have succeeded in convincing themselves that GOV.UK Verify (RIP) complies with PCAG's identity assurance principles. But no-one else.

The following comment has been submitted on GDS's blog post Applying the identity assurance principles to GOV.UK Verify: Part 3:

The DMossEsq comment above on the GOV.UK Verify (RIP) blog has been deleted and the following email response has been received:

The following response to GDS has been sent: