For seven years DMossEsq has been boring the world with scare stories about biometrics. "Biometrics don't work", he's been telling anyone not agile enough to get away from him first, "not well enough to do the job they're meant to do, not in the mass market, not with large populations".

Even the other day when those fashionable and lovable exploiters of third world labour Apple announced details of the iPhone 5S, with its fingerprint verification, he couldn't stop himself writing about the problems of false non-matches.

These warnings just wash over people. It's all theoretical. "Computer says no" is a line in a very rude TV comedy show, it doesn't happen in real life.

The Hindu, 14 September 2013, 'How the biometric system has failed hard working people':
India is gradually introducing Aadhaar, a biometrics-based identity management scheme which is meant among other things to reduce corruption in the food security system. "PDS outlets" can give subsidised rice to genuine claimants, who use Aadhaar to prove their entitlement, and withhold it from scammers.

At least they can if the biometrics work.

So the PDS shops initially refuse rice to genuine claimants. And then, like normal human beings, they relent, give them the rice anyway, otherwise they'd starve to death or start a riot, and damn the system – "Mr. Vombatkere said that if the beneficiary has to depend on the munificence of the officials to get their quota and not as their right, then the purpose of introducing the biometric system is defeated".

All that money spent on Aadhaar. 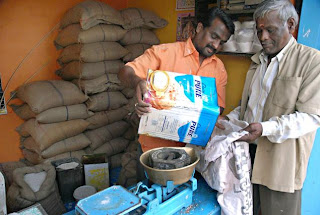 That's not a theoretical PDS agent, in the picture alongside, giving theoretical rice to a theoretical claimant. They're all real. Like the failure of mass market biometrics.

Remember, you're entitled to the money in your bank account. It's yours.

But suppose you had to use biometrics to prove that. And suppose the iPhone said "no". Or rather "match not found". Then maybe it wouldn't be so theoretical after all.

The trainspotters and stamp collectors among you will remember that the strength of Aadhaar is derived, according to the Unique Identification Authority of India (UIDAI), from using not one but two biometrics – fingerprints and iris scans.

How come the match-not-found people whose fingerprints fail the biometric test for rice can't be identified by their iris scans instead?

You didn't seriously suppose, did you, that the UIDAI were going to waste money installing iris scanners in tens of thousands of outlets?

How high is your boredom threshold?
Posted by David Moss at 17:07

Why use biometrics to IDENTIFY the BPL beneficiary, when the Food Inspectors decide whether they are ELIGIBLE or not?
Has anyone investigated how PDS rations are siphoned away?