Computing isn't that exciting. There's not a lot of news. You'd expect this event – Sprint 14 – to have been covered by all the computer media.

You wouldn't expect the generalist media to cover the event, of course, but that's odd, too – because Sprint 14 was more political than you might expect. 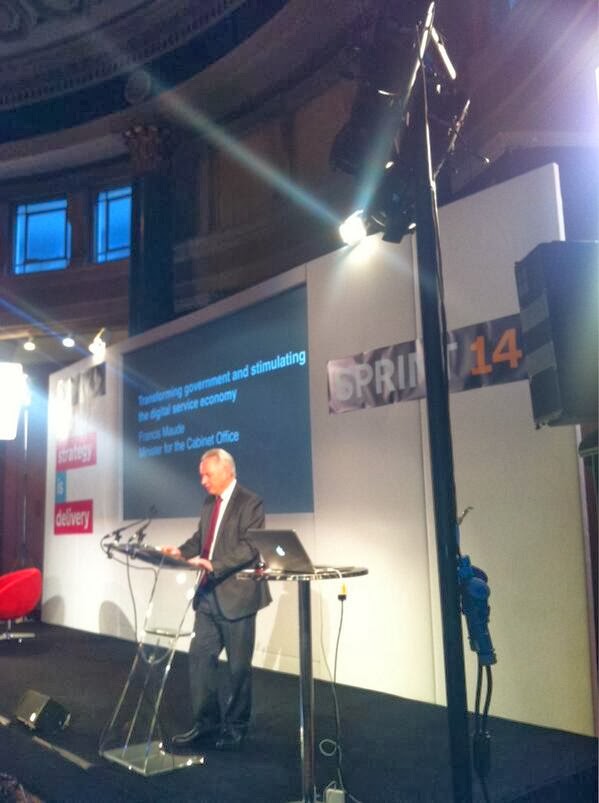 Sir Jeremy Heywood, the Cabinet Secretary, was there. He didn't speak but Treasury minister David Gauke did, as did Greg Clark, minister for Cities and the Constitution, Mike Parsons, chief operating officer at the Home Office, Oliver Morley, chief executive of the Driver and Vehicle Licensing Agency and Jeremy Wright, minister for prisons and rehabilitation.

And Martha-now-Lady Lane Fox was there, which usually guarantees several column inches, but no – nothing in the Times, the Telegraph or the Guardian.

Mr Maude assured the audience that "SMEs are engines of growth in our economy" and promised that government would spend more and more money with small and medium-sized enterprises, rather than giving it to the oligopoly of big IT suppliers. The oligopoly, that is, who keep wasting billions of pounds of public money – your money and mine – on failed IT projects. "This is a massive vote of confidence in the role [the SMEs] are playing to help Britain compete and win in the global race", he said.

That was after he'd already said that "digital is one of the major contributions to reducing the deficit and encouraging growth in the British economy ... As the Chancellor highlighted recently, every part of the public sector will continue to need to face up to the challenge of reduced budgets for some time to come ... And we know much more money can be saved – staggering savings potentially – while actually improving quality online".

Which, in turn, came after this hostage to fortune: "We’re changing things by doing them, not by talking about them. We’re the JFDI school of government".

It was 29 October 2013 when Public Servant of the Year ex-Guardian man Mike Bracken CBE published GDS goes to Cabinet. He is the executive director of the Government Digital Service (GDS), part of the Cabinet Office, championed by Mr Maude, and he was allowed to make a presentation to the full Cabinet.

That doesn't normally happen and DMossEsq raised the question at the time whether the government are considering making the alleged successes of GDS a plank of their election strategy. Now, with Sprint 14, the question arises again.

Let's hope for their sake that they don't try it. By the time of the next general election, May 2015, there will be five years of National Audit Office reports providing ammunition for the opposition to shoot down the claim that this government succeeds with IT where others fail.

We have recently had the example of the Ministry of Defence recruitment system and Capita's failure to get it right. There will be the on-going tragedy of the Department for Work and Pensions Universal Credit system. And by May 2015, who knows what else.

Mr Maude and the government are making a politically fatal mistake if they believe GDS's over-enthusiastic salesmanship.

GDS are in no position to take on the oligopoly. They have no experience of analysing, designing, implementing, deploying and supporting large-scale government IT systems. The cocky profanity* of "we’re the JFDI school of government" is ridiculous.

If the government picks a serious fight with the oligopoly without having an alternative to replace them, the machinery of Whitehall will stop.

That's a tremendous platform if you're standing for election in the anarchists interest. But Mr Maude, presumably, isn't.

You can just about see how the computer press might fail to report that point. But RTFM** – the generalist media should have spotted it.

Yes, well, Francis Maude is certainly a JFDI politician - he and his modernising chums have spent years just fucking destroying the Conservative Party's chances of ever again gaining an overall majority in parliament by just fucking introducing legislatiion seemingly designed to just fucking drive its traditional supporters into the arms of UKIP.

I feel I should point out to the millions of my other readers that Scott is one of my oldest and best friends and that, despite that bashful way of his with words, he does actually have some quite trenchant political views.

Scott, good to hear from you, it's been too long, my fault, I would go further than you. Mr Maude's antics with the Government Digital Service infuriate people of every colour on the political spectrum so much so that the objection to the policy isn't that it's socialist or conservative – it's inhuman.

Good to be back, David. I once had him as a guest on a live late-night political discussion show on the BBC. He was unbelievably supercilious and superior and gave the impression of knowing things we were simply too thick to understand- he was evidently doing us an enormous favour by accepting our invitation. I thought at the time that we'd done something to put his back up, but as this is evidently his attitude to the vast majority of the members of his own party, smug contempt appears to be his default mode.

I think we can assume that Paul Vale of the Huffington Post was given the same treatment and got his own back. Talking about the initial failure of the Obamacare website in an interview with Mr Maude, he wrote:

The minister added that his department had not been consulted by the Obama administration but suggested that they "probably should" get in touch due to the global interest in the British government's IT roll-out ...