... every transaction you ever undertake should depend on Mydex.
No Mydex, no transactions ... 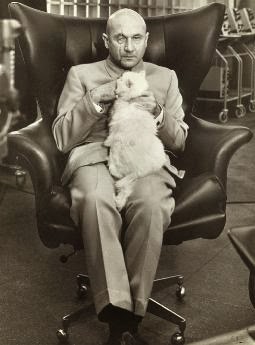 "Ernst Stavro Blofeld is a fictional character and a supervillain from the James Bond series of novels and films, who was created by Ian Fleming and Kevin McClory. An evil genius with aspirations of world domination, he is the archenemy of the British Secret Service agent James Bond. Blofeld is head of the global criminal organisation SPECTRE and is commonly referred to as Number 1 ..."

Thank you, Wikipedia, that's quite enough of that.

Bond, Blofeld and SPECTRE are all in another dimension. Fantasy. Let's get back to terror firmer ...

... terror firmer, and midata, the realistic and meticulously planned initiative thoroughly thought through by the Department for Business Innovation and Skills (BIS) to empower the consumer, to nudge everyone into a better lifestyle and to make the UK economy grow.

How will midata empower the consumer?

By inverting the customer relationship management (CRM) whereby major suppliers currently sit at the centre of a web and manipulate us consumers and creating instead a world where the consumer sits at the centre, stroking his or her cat, and using vendor relationship management (VRM) to manipulate the suppliers. Each consumer's data will be under his or her own control, the suppliers will only see what the consumers allow them to see. That – according to BIS, or at least according to BIS's advisors Ctrl-Shift and Mydex – is the route to consumer empowerment.

If you can't make head nor tail of it, it's all explained better in a new post on the Mydex blog, Do people care about personal data? – yes, if they can get it easily!: "The business of living is easier if you are in a position to receive, without effort, the telemetry of your life" – says it all.

Maybe a picture will help. This one, for example, from the Mydex CEO's talk given last November:

There's the user, you see, manipulating various branches of government – HMRC, DWP, DVLA, ... – and puppetmastering huge suppliers – banks, phone companies, energy suppliers, ... – completely in control, empowered, right at the very centre of his or her own web.
Can you see that?
Or do you see ... Mydex, and a Cheshire cat's grin at the centre?