No need to say it, it goes without saying, it should be obvious to all but,
just in case it isn't obvious to all,
IDA is dead.
IDA, now known as "GOV.UK Verify (RIP)",
is the Cabinet Office Identity Assurance programme.
And it's dead.
Last heard of, Stephen Dunn wrote a blog post with Janet Hughes, please see RIP IDA – what they omitted from the obituary. That was about GOV.UK Verify (RIP) and so is his latest contribution, Meeting user needs:
Younger readers may have gained the impression inadvertently given by GDS that researching user needs is a new invention of GDS's. No. Eliciting user needs has been recognised as part of requirements engineering from the year dot. Please see for example Professor Ian Sommerville's Software Engineering, first published in 1982.

GDS are late to the party with their discovery, (according to Mr Dunn it's a GDS discovery), that users have a "tacit need" for their personal information to be held securely and for the GOV.UK Verify (RIP) registration process not to be "stressful or confusing":
Who knew?

GDS's repeated claim to give unique prominence to user needs is untenable. The rest of Whitehall and local government have a track record stretching back decades before GDS existed of taking user needs into account.

According to the UK parliament's Public Accounts Committee (PAC) GDS ignore user needs anyway when those needs obstruct GDS's superior creed of digital-by-default, please see The Common Agricultural Policy Delivery Programme (p.5):
Mr Dunn repeats the creed when he says that "there is assisted digital support in place within each service for those who need support to use a digital service".

That is questionable, please see GDS & assisted digital – the project that keeps on starting. It is not clear what support GDS are offering members of the public.

The PAC point out that GDS couldn't even provide the support necessary to the Rural Payments Agency (also p.5):
He repeats the creed when he says that "we are making sure that GOV.UK Verify [RIP] is interoperable with other national and international standards and systems".

We have yet to see if GOV.UK Verify (RIP) is interoperable with Scotland's separate national identity assurance scheme, myaccount, and whether it is up to the standards required by the European Union's Regulation 910/2014, eIDAS. We need to see this interoperability in ... operation for ourselves, we can't take it on trust.

Repeating the creed like that doesn't achieve the 90% coverage target.

Experian is one of GDS's GOV.UK Verify (RIP) "identity providers". They say that they have identified some databases full of our personal information which, if only they could have access to them in addition to all our credit history, would allow them to improve coverage.

What databases are these? Experian won't say. Neither will GDS, despite having promised to, 15 months ago on 1 December 2014. So much for that other contention in the creed to the effect that GDS are uniquely "open".

Turning to the matter of privacy, Mr Dunn says:
The Privacy and Consumer Advisory Group have devised nine principles of identity assurance for GOV.UK Verify (RIP) and GDS do not obviously abide by a single one of them. They just keep dutifully saying that they do.

Mr Dunn repeats the creed when he says that GDS are "requiring GOV.UK Verify [RIP] certified companies [previously known as "identity providers"] to be certified as meeting published standards for identity assurance and information security, and making them liable to their users if they fail to meet the required standards".

How can he say this when he must know that the Post Office, for example, one of GDS's "identity providers", is not certified?

We're talking about tScheme certification here. That's what was promised by GDS back in April 2013. And again in January 2014.

Janet Hughes, the GOV.UK Verify (RIP) programme director, now says "Post Office uses the same system as another provider which has been t-Scheme certified, so we have agreed that there is no need for a second certification of the same system". That's not what was promised.

The Post Office allowed its application for a certificate of trustworthiness to lapse a year ago, on 24 February 2015. Users who think they are registering with the Post Office are actually registered behind the scenes with a different "identity provider", Digidentity.

It's not just the Post Office. Barclays aren't certified and neither are Safran Morpho. And PayPal, another "identity provider", haven't even applied for certification.

Mr Dunn's assertion that "identity providers" are all certified is simply false.

N This is wrong. Safran Morpho do not limit their liability to £100.But not only are all "identity providers" certified according to Mr Dunn, they are also "liable to their users if they fail to meet the required standards". Not very liable.

Take a look at Safran Morpho's terms and conditions, for example. Their GOV.UK Verify (RIP) offering to users is called "secureidentity" and:
That elaboration of the creed is not spoken out loud by Mr Dunn.

The creed explicitly includes "putting in place protection and monitoring to protect the service from attack" and "meeting high standards for security". But it excludes any answer to the review of GOV.UK Verify (RIP) conducted by four academics who identified a number of security holes – holes which are not filled by simply repeating the creed.

You'd think that that would be all, wouldn't you.

Mr Dunn says that "there are 10 services currently available to the public through GOV.UK Verify [RIP] ...". The GOV.UK performance dashboard for GOV.UK Verify (RIP) only lists nine under Government services, not ten.

One of the government services GOV.UK Verify (RIP) is meant to be connected to is Apply for Universal Credit. Use the Apply in Croydon, Hounslow, Southwark or Sutton button with an appropriate post code and you'll see this: 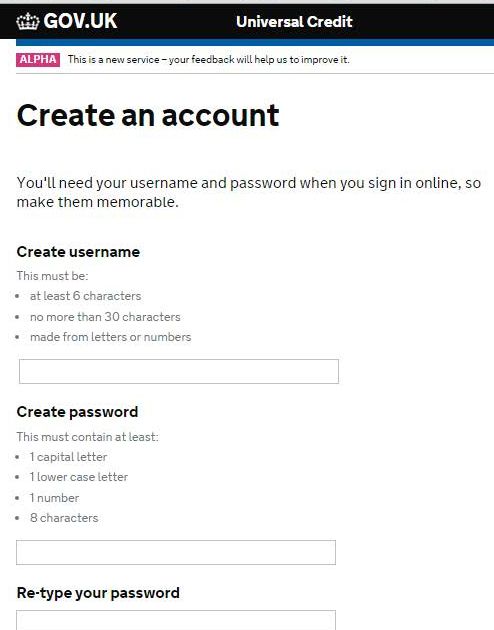 Ditto if you use the If you live elsewhere/Start now button, no sign of GOV.UK Verify (RIP), what you'll see is: 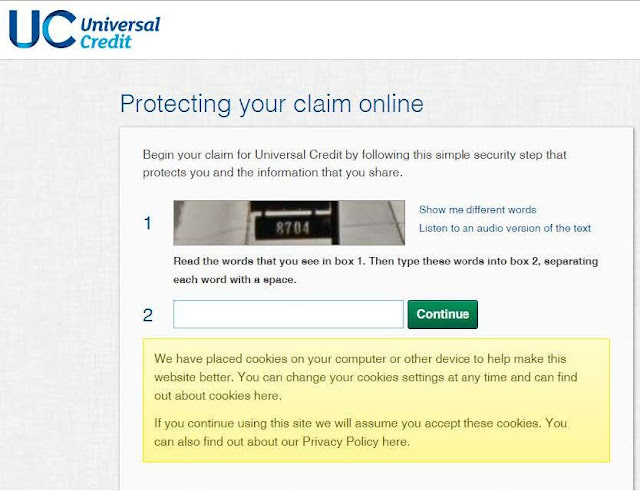 There must now be a question whether GOV.UK Verify (RIP) is connected to the Apply for Universal Credit government service at all. The creed seems to be blatantly false.

... and that's just too ambiguous. The creed must be clear. There are too many doubts. Doubts about the number of public services and the security of GOV.UK Verify (RIP) and the question whether its users will be compensated for any losses and the promise that all "identity providers" are certified trustworthy and the control its users have over their personal information and the extent to which GDS are being open with us and the problem of people being excluded and interoperability with other national identity assurance systems and the primacy of user needs and ...

That's not a creed. That's a confused mess. A confused mess that's going live in a few weeks time, in April 2016 if Mr Dunn is to be believed.
Posted by David Moss at 00:15