In the remaining months of your existence, let's take a look at the other "identity providers". Are they behaving like Digidentity?

Ingeus – one of GDS's early "identity providers", they never provided anyone with a GOV.UK Verify (RIP) on-line identity. Ditto Cassidian. And Mydex. And PayPal. They all pulled out before they could do any harm. Verizon stayed a while, but now they, too, have pulled out. So that's five "identity providers" we don't need to worry about.

After Digidentity, DMossEsq signed up with Barclays. They're a bank. Banks are good at on-line identity management. Registration went smoothly: 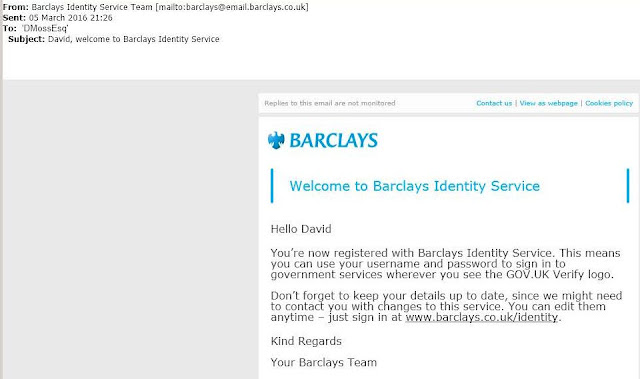 It is almost inconceivable that DMossEsq should enter his username or password incorrectly. Nevertheless, try 'Need help signing in?' as suggested, and what does he see?

It's not looking healthy, is it, GOV.UK Verify (RIP)'s identity assurance. It's getting harder to feel confidence in it.

How on earth can a gigantic UK retail bank get into this embarrassing position?

The Barclays GOV.UK Verify (RIP) service depends in some unspecified way on Verizon. "We may share your personal information with ... Verizon, our technical services partner, so they can perform certain parts of the Identity Service on our behalf", it says in the Barclays privacy policy. Now that Verizon have disappeared perhaps Barclays can't function.

The theory may or may not be right. Either way, that's seven GOV.UK Verify (RIP) "identity providers" down and just four to go ...

"Seven GOV.UK Verify (RIP) 'identity providers' down and just four to go"? No. It's five to go – CitizenSafe/GB Group plc, Experian, the Post Office, the Royal Mail and SecureIdentity/Morpho. Not four. Five.