RIP IDA – agile identity, now you are you, now you're not

"Congratulations!", they said in the email, "You have completed the registration process": 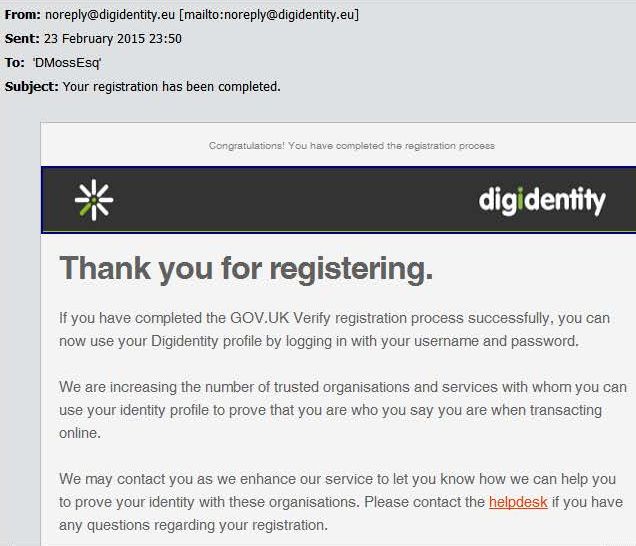 There he was, DMossEsq, all kitted up with a brand new on-line identity, provided by GOV.UK Verify (RIP) via Digidentity, one of the Government Digital Service's "identity providers".

Digidentity had collected all the details of DMossEsq's passport and driving licence, among other things, and here they were confirming that he is him, the person he claims to be. "Your registration has been completed" – that's what the email says. And polite to a fault, Digidentity even said: "Thank you for registering".

And yet yesterday, when DMossEsq tried to log in for the sixteenth time since that email, he couldn't get through to his personal tax account. There has been no communication from Digidentity since the email above but Digidentity now want more passport details before they'll confirm that DMossEsq is DMossEsq:

Digidentity want an image of the passport uploaded, using an app of theirs which has to be downloaded onto DMossEsq's mobile phone first: 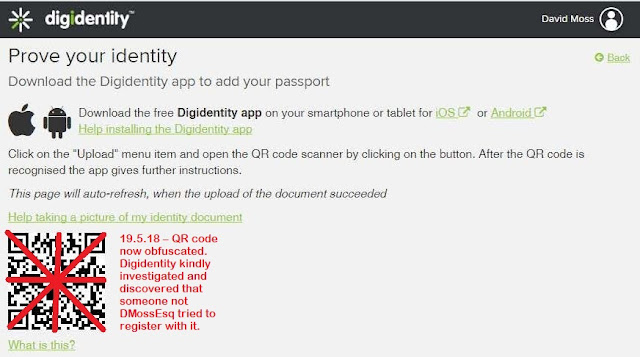 The GOV.UK Verify (RIP) team make it all sound so easy. Register once and they'll vouch for you, they know who you are because you've already proved it and they'll tell HMRC or whoever yes, this is DMossEsq. You have to hand over an inordinate amount of personal information about yourself but at least you'll then be able to use public services on-line.

The bargain has been broken. You've handed over the personal information. You still can't use public services on-line.

It seems that an "identity provider" can without warning decide that you aren't you after all and demand further proof without which you can't communicate with any government departments using GOV.UK Verify (RIP).

That could be serious. Suppose you were away from home without your passport, on a sales trip to the Northern Powerhouse, for example, selling gluten-free cupcakes to digital entrepreneurs, and you needed to pay your tax bill. You sit down in your hotel room confident that you can make this payment because you've got your trusty Digidentity on-line identity already set up ...

... only to find that your on-line identity has been taken away from you. Result? You have to pay interest on your tax and a penalty in addition. And there's no compensation. Thank you, GOV.UK Verify (RIP).

Even if you do have your passport with you in the hotel, why should you have to download an app from Digidentity? That's tantamount to deliberately installing a virus.

You never know where you are with GOV.UK Verify (RIP). That could be one reason no-one's using it.

How does this come about? How have the Government Digital Service (GDS) acquired the attitude that they can change the rules behind your back?

The answer is "agile".

Their agile software engineering methodology assumes that they can iterate. They can make changes to live public services all the time. That's what Google do with Chrome, for example. And Google embody the internet era. GDS want to transform government so that it becomes digital by default. And what does "digital" mean? Answer: "digital means applying the culture, practices, processes and technologies of the internet era to respond to people’s raised expectations". So that's what GDS can do with GOV.UK Verify (RIP).

They were warned about this, in January 2013, when four professors told them that: "there are risks that rapidly changing services will deter the takeup of digital services, not encourage it". They didn't listen.

The matters above have been brought to Digidentity's attention and the Government Digital Service's.

Which document? They don't say.

Whatever their emails say, DMossEsq's GOV.UK Verify (RIP) account registered with Digidentity still doesn't work. He still can't use it to access his personal tax account.

Are Digidentity allowed to withdraw the right to access public services from people to whom they have previously granted that right?

Should they notify people first?

Are they allowed to demand more and more intrusive access to people's personal information such as insisting on their app being installed on our mobile phones?

Can they change the rules as they're going along so that one day you are you and the next day you're not?

Are GDS comfortable with Digidentity creating people on-line and deleting them, wiping them out, so that they don't exist any more?

Do GDS even know it's happening or have they lost track?

These are general policy questions of interest to everyone. Digidentity's offer to discuss them in private won't do.

"We're building trust by being open" – that's GDS's claim. Time to prove it.

DMossEsq has made no attempt to use his Digidentity GOV.UK Verify (RIP) account since 19 September 2016, please see above. Today, the following email was received: 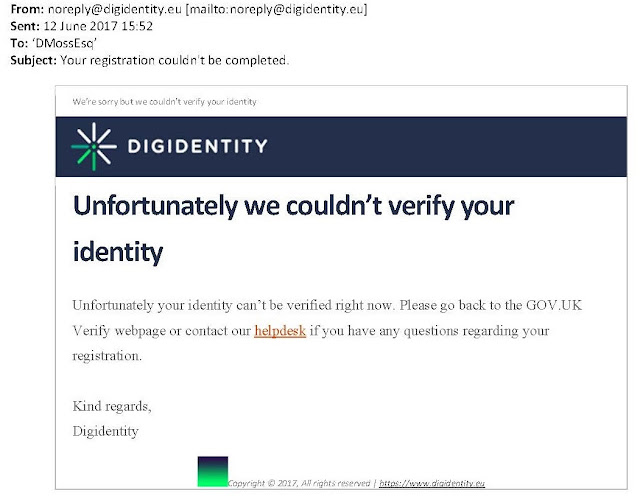 "We're sorry but we couldn't verify your identity". Very odd. DMossEsq hasn't asked Digidentity to verify his identity. Perhaps someone else has. Who? Why?

It looked as though someone was trying to use one of DMossEsq's GOV.UK Verify (RIP) accounts, the one maintained by Digidentity, please see above.

An email to Digidentity elicited several prompt responses, please see below, for which they have been thanked.

In the event, it was not a third party but Digidentity themselves who were accessing the account, they were trying to do one of their periodic checks that the account is still kosher. It might improve the user experience in future to make that clear in the email automatically sent to the accountholder.
"CEST" turns up a lot in the correspondence with Digidentity. It stands for Central European Standard Summer Time, the timezone chosen by Zendesk, who provide user support services to the Government Digital Service and, so it appears, to Digidentity as well. As we were saying in March:

In a re-run of what happened last year, 1 May 2018, DMossEsq got an email from Digidentity saying "Your registration couldn't be completed". Same day, DMossEsq brings this to Digidentity's attention and points out that he hasn't tried to register recently. Five more emails are exchanged over the next two days and then, 18.5.18, this email arrives from Digidentity:
It seems that including the Digidentity QR code in the 20 September 2016 post above opened the door to people using it to try to register for a GOV.UK Verify (RIP) account.

The attempt(s) failed thanks to Digidentity's existing procedures. Digidentity have nevertheless, as a result of this incident, decided to enhance their procedures to make the use of their QR codes one-time only – a decent partial solution but note that DMossEsq didn't use the QR code so the first user would still be someone else not DMossEsq.

The QR code has now been obfuscated in the blog post above.

Search for 'Digidentity QR code' in Google images as Digidentity suggest and you will find the code Digidentity sent DMossEsq and several others.

In the interests of science, DMossEsq logged in to his Digidentity account to see the picture of the lady who tried to register using his QR code. Nothing doing, it's not there.

The details provided on 23 February 2015 matched the information held by DVLA, HM Passport Office and Callcredit, please see above. Now they don't – now you are you, now you're not.

On the one hand, good work done by the Digidentity customer support team. And by Mr Marcel Wendt, the founder of Digidentity, whom DMossEsq bumped into at the Think.Digital Identity for government conference on 18 May 2018 and who knew all about the incident.