G-Cloud ii has been released. There are now over 3,000 conveniently automated ways for central and local government departments to lose control of their IT through CloudStore. 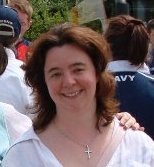 Eleanor has been closely involved in the project and, as a trained archaeologist, she will be particularly well-placed to go through the remains after it all comes tumbling down, identifying the signs of a once-thriving civilisation. "I look forward to watching it happen from my new role in the FCO", she says – G-Cloud's loss is the Foreign Office's gain.

She will be missed. She said G-Cloud ii would be released on 26 October 2012 and it was. She provided a forum for debate and she confronted criticism openly, e.g. "What the heck can we do to resolve some of the scary and largely unknown legal and policy issues that people are nervous about in a globalised world?". Good question. No answer. But at least she asked. The Foreign Office are lucky.

It's not unknown for Whitehall to be open about criticism. Lin Homer at HMRC is pretty good at it and has been for years. We may yet discover from her, HMRC's side of the story about losing control of all our tax records in the cloud with Skyscape, the one-man company with no track record.

Compare that with the Government Digital Service (GDS).

They said they would announce the names of the UK's so-called "identity providers" by 30 September 2012 and they didn't. Then they said the announcement would be made on 22 October 2012 and it wasn't.

Ask them why they've decided to host GOV.UK on Skyscape and they can't answer.

Send them an open letter, and there's no response.

Issue a press release with 17 questions, and you get 0 answers.

Security experts at a Whitehall conference pour scorn on GDS's idea of relying on the social networks for identity assurance and ... silence.

GDS claim to want "participation" as they build the new city on a hill with their (tax) dodgy friends. They don't understand the word. Not the way Eleanor Stewart does.

PS At 10:24 a.m. yesterday a notification was emailed to everyone announcing a new post by Mike Beaven on the GDS blog, Refining transactions with help from the Minister. Click on the link and you get "404: Page Not Found". A Twitter enquiry from Kris Coverdale was met with "we just needed to correct something. We'll be putting it back up again later". That was yesterday. 15 minutes ago, via Tim Lloyd, we have "It wasn't displaying correctly. Trying to resolve now". Just how hard is it to participate?

* A lost fragment from GDS's Less About Identity, More About Trust thread recently discovered by archaeologists. What do GDS know about identity? Or trust? And how many other fragments are missing?

We're evidently dealing with a religious belief system here. The opportunity to "participate" is confined to believers. "Trolls", in this context, is a synonym for "heathens", "heretics" or "sceptics". Be careful, Mr. Moss - the Inquisition can't be far behind!