RIP IDA – are GDS talking to themselves?

"If Verify is the answer, what was the question?"
Every week, the Government Digital Service (GDS) publish statistics about GOV.UK Verify (RIP) on their performance platform. A degree of academic rigour is called for. Without that, GDS are just talking to themselves.

As we speak, some of these statistics are complete to the week 11-17 April 2016 while others include the week 18-24 April 2016. We ignore the latter in the paragraphs below.

1. Total authentications
We ignore the 185,149 basic accounts. These are unverified and have no place in a verified identity assurance system.

Adding the two together – which is GDS's peculiar way – tells us that total authentications went up by 31,284.

2. Authentications per week
Nothing to add.

3. Authentication completion rate
43% for sign-ins and account creations added together. Given that there were 31,284 completed/successful authentications (see 1. above), if that's 43% of all attempted authentications, there must have been 72,753 authentication attempts in all, of which 41,469 failed.

4. Authentication success rate
90% – no idea what this means.

It could be worse than that. Those 7,509 verified accounts could be 939 people each creating one account with each of the eight "identity providers". On that basis, 50 million people would need 400 million accounts which could take 1,024 years to create.

Most people die before they're 128, let alone 1,024, which implies that GOV.UK Verify (RIP)'s registration job can never be completed.

The advocates of biometrics look for a failure-to-enrol rate (FTE) of less than 1%. Anything higher casts doubt on the credibility of proceeding with that biometric. GOV.UK Verify (RIP)'s FTE of 29% makes the feasibility of the system problematic.

Given that a total of 41,469 attempted authentications failed (see 3 above) and that 3,067 of them were attempted account creations, the other 38,402 must have been failed sign-ins.

Given that there were 72,753 authentication attempts (see 3. above) and that 10,576 of them were attempted account creations, there must have been 62,177 attempted sign-ins.

That is similar to the FRR for face recognition any time more than six months after the enrolment photograph is inscribed on the register. Face recognition is useless as a biometric. GOV.UK Verify (RIP) looks similarly useless if its FRR really is 62%.

You can reduce the FRR, of course, by making it easier to achieve a match. But that has the effect of increasing the false accept rate (FAR), i.e. it becomes easier for a person to pretend that they're someone else, which is the opposite of GOV.UK Verify (RIP)'s objective.

GDS nevertheless plan to announce some time this week that the duck is alive. In their world, perhaps it is. But not here on Terror Firmer, it isn't.

GDS are doing what they can to reduce it:
The other action GDS could take is to change the enrolment process. At the moment, the identity of a given name, address and age with sex optional is verified by reference to passport details, driving licence details and credit history. The enrolment process could be changed to take into account further personal information.

Most people are not often exercised by questions of privacy but GDS's demand for yet more personal information might tip the balance.

Despite GDS's claims to the contrary, we have little or no proven control over these personal details once they have been divulged.

The privacy and fraud risks seem exorbitant compared with the benefit of being able to use GOV.UK Verify (RIP) to view our driving licence details on-line.

It seems unnecessary to amplify those risks when we already have the Government Gateway as a long-established working alternative to GOV.UK Verify (RIP).

Unnecessary also when, according to GDS, no other country has adopted this approach, the UK is in the vanguard.

In the absence of any additional personal information being added to the GOV.UK Verify (RIP) enrolment process we are left with GDS's eight "identity providers". 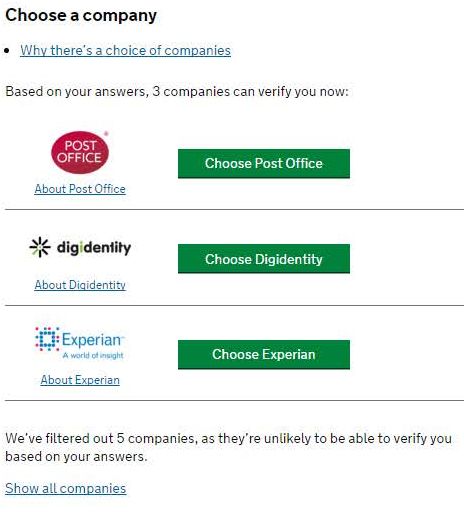 The position of Barclays is odd. You'd think they would be among the best enrolment agents. Whatever percentage of applicants they can shepherd through the registration process should be definitive. Far from consigning Barclays to the out-of-favour list, perhaps GDS should be checking the apparently outperforming Digidentity, Experian and the Post Office to make sure that they aren't relaxing the matching criteria and exacerbating the FAR problem (false accept rate).

With only three favoured "identity providers", GDS are exposed. The Post Office is not a "certified company", its application for approval lapsed well over a year ago. And Digidentity and the Post Office are linked. If one of them suffers a security problem, they would both be knocked out, leaving GOV.UK Verify (RIP) with just one "identity provider" – Experian.

This visible promotion of Experian into the UK Constitution as the "identity provider" of choice for the entire nation has not been even debated by Parliament, let alone agreed. In this matter, GDS are wildly out of their depth and ultra vires. They need to talk to a lot more people about it than just themselves.

A new metric has been added to the GOV.UK Verify (RIP) dashboard:

User satisfaction, please see 7. above, remains a thing of the past. It is measured in three ways and none of the figures have been updated since 27 March 2016.

Mr Skidmore is a historian as well as a politician. He knows to check his sources. But on this occasion he didn't. Since going live in May, GOV.UK Verify (RIP) has verified 218,145 users and not "more than 900,000" of them.

Even its supporters warn about the "wildly unrealistic expectations" of GOV.UK Verify (RIP). Next time he delivers a speech prepared for him by GDS he is advised to check it first.
Posted by David Moss at 01:30