Monday was a big day that week. 23 September 2013 was the deadline for suppliers to put in their bids.

'Submitting for G-Cloud 4? Don’t leave it to the last minute', it said on the G-Cloud blog. This is the fourth version of G-Cloud. There's a new version twice a year. Miss the deadline, and their services couldn't appear for sale on the CloudStore, the UK government-sponsored supermarket in the ether for cloud computing, for another six months. 'One week to go – a few extra tips on submitting for G-Cloud 4'. Etc ...

Then time was up. All those eager candidates who handed in their scripts on time just had to sit back and wait for their exam results.

The examiners put out a bulletin a few days later, on 26 September 2013: "G-Cloud was set up to be a new platform for the public sector to buy ICT ..., specifically cloud services, in a simpler, clearer and faster way".

"Simpler, clearer and faster"? Haven't you heard that somewhere before?

Yes, you have, it's the slogan on GDS's GOV.UK, "the best place to find government services and information". That's the Government Digital Service's way of reminding all the applicants that GDS are in charge of G-Cloud now, and have been since 1 June 2013.

Two weeks later, 10 October 2013, GDS blogged again: "If you've applied for G-Cloud 4 you should be hearing shortly as to whether you have been successful. Your services will then be listed in the CloudStore ...".


The candidates were duly notified of their exam results and jubilant tweets started to appear from the successful ones:


Etc ... Lots of proud SMEs, all looking forward to selling their wares on the CloudStore. You get the picture.

Except that, if you logged on to the CloudStore on Monday 28 October 2013, this was the picture: 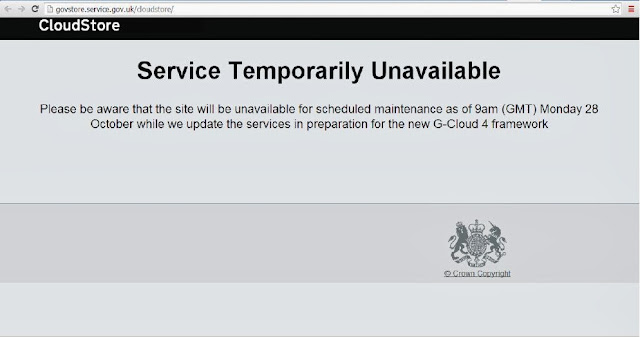 And that was the picture on 29 October 2013. Not a supplier or a product in sight.

What was it that ex-Guardian man Mike Bracken, the executive director of GDS and the prophet of so-called "agile" computing, said after he attended a Cabinet meeting on 29 October 2013?
For four days his users were left with no service.

The previous week he'd been in Washington DC, joining in the criticism of the ObamaCare website, debunking the big IT suppliers and making the point that failures like that can be avoided, if you've seen the light, by adopting an agile approach:
Delivery, eh? And user needs. It's not just "big IT" that fails.

Let's hope that the government aren't hoping to make an electoral issue out of GDS and the "smarter and cheaper services which meet users needs" that they promise. For four days no services were available at all. Just ask any of the new boys in the school, like UK Backup, Advice Cloud and Damovo above. Just ask any of their appalled clients. Groundhog Day, indeed.