Putting the user first – what does it mean?

Why is [are?] design and creativity important to your organisation? That was the question Design Week was asking last Friday and a jolly good question it is.

Can you guess GDS's answer? Are you beginning to get the hang of this user needs business?
Deflect your eyes from the screen for a moment, look around you and look back, and you may see that the "organising principle" of every government department is meant to be the user, that doesn't distinguish GDS, it's not a new idea.

Design and creativity are of course important but again, that's not a new idea. You may remember that each government department website once had its own branding, designed to suit its users. Arguably, the award-winning GOV.UK took an undesign step backwards when it standardised the lot of them.

It's that time of the year again. Reinvigorating the troops with self-congratulatory jamborees. This time last year we had The future is here. Today it was Sprint 14 (which remained coyly imprecise about where the future is now).

Rt Hon Francis Maude MP gave a speech today which returns to the theme of the post above, viz. the useful versatility of the phrase "user needs":

Anyone can play the what-does-user-needs-mean children's game to achieve any result they want. It's easy. Here's an example. Look:

A year ago, four professors reviewed the Government Digital Strategy and said: "We see little discussion of a concrete and practical change management process to support the “digital by default” strategy in the current [Government Digital Strategy]. We view this as a potentially fatal omission. Put another way, trying to drive cultural change via technology (IT) is highly risky and almost never succeeds".

The following comment was submitted  at 9:14 yesterday morning, 30 January 2014, by someone remaining anonymous. The computer said no – the length of the comment exceeds some limit – which is why none of DMossEsq's millions of readers have seen it until now.

It is posted here, where the size limit is more generous, so that people can see a more grown-up way of playing what-does-user-needs-mean:
Our commentator, Mr Anonymous, is saying that a lot of tools for software engineering exist and that he suspects that GDS, the Government Digital Service, to the detriment of their performance, aren't using them. Item #19 in his list, for example, would address the four professors' concern about change management. 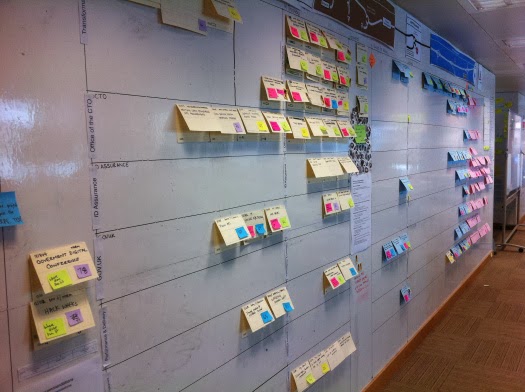 There is some evidence that he's right.

Consider, for example, this post on the GDS blog, Scaling Agile Practices to the GDS Portfolio. It's all about how GDS manage projects. Their preferred method is to use a wall.

There are at least two problems with that – walls are predominantly two-dimensional, whereas project management has many more dimensions, and you can't put walls in your briefcase and take them to another office to discuss them.

GDS have attempted to resolve those problems by developing a project management system, starting by asking the users what they need:
And what did they come up with? All they tell us about is a pie chart: 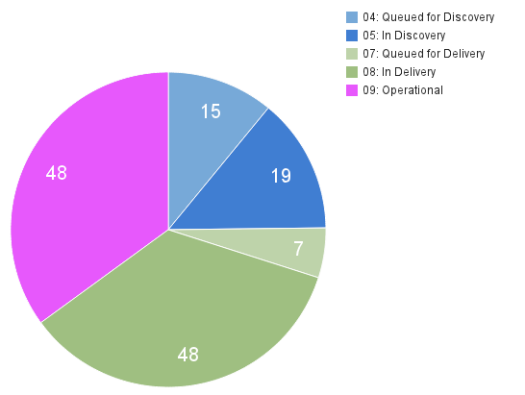 And yet the world is full of sophisticated project management tools. Has been ever since the first Pharaoh started running up pyramids. See #9 in Mr Anonymous's list.

There's no dishonour in using other people's software. But GDS seem to have preferred in this instance to reinvent the wheel.

And not just this instance.

As part of their doomed identity assurance project, IDA, GDS have elected to develop a brand new "hub" to link government departments, people and so-called "identity providers". There was no need to do that. We already have the Government Gateway.

When the Electoral Commission complained that GDS wouldn't tell them their costs for working on individual electoral registration, you may have assumed that GDS preferred to withhold the numbers, perhaps because they were embarrassing. But there is another possibility – maybe GDS don't record time and don't cost it, maybe they simply didn't have any figures to give the Commission.

Prima facie, Mr Anonymous seems to have rather a good point. Perhaps someone at GDS should take another look at the software engineering tools already available and consider using them instead of building new ones.

This is another matter that worried the four professors:
The lights may be on when Mr Anonymous knocks on GDS's door to talk about user needs. But is there anyone in?
Posted by David Moss at 13:11