Whitehall's rethink headache. And the Whitehouse's

That wailing you heard throughout the land last week, the rending of shirts clothes and the clatter of teeth being gnashed – what caused it?

Was it the fact that only-one-way-to-go-from-there Apple was knocked off the top spot in the list of the world's biggest companies by market capitalisation?

But there is another hypothesis to explore.

Even though it shouldn't have been, the world was shocked by the failure of the Obamacare website. Millions of dollars spent on it, and it didn't work. And the seven or eight of us who follow these things were also a bit agitated at the failure of Universal Credit here in the UK, millions of pounds spent on it, etc ...

How can so many experienced professionals work so hard and be paid so much and yet the ObamaCare and Universal Credit IT systems don't work?

The thoughtless answer that has launched a thousand lazy-minded op-ed pieces is that these big government systems are written by ponderous, greedy, bloated contractors, so huge that if they stub their toe it's two years and a couple of billion dollars before the signal registers with their brains.

This sort of development work should be done by small, hungry, lithe, agile, lissom, innovative, imaginative companies – SMEs, small- and medium-sized enterprises. It's the end of "big IT", ex-Guardian man Mike Bracken told the Cabinet last week, and Washington DC the week before.

But then the logic gates short-circuit and the previously bien-pensant brain starts to overheat. 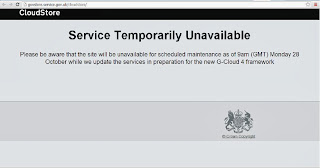 After all, they don't come much bigger than Apple and Google, and what are they famous for? In a word, "agility". Imagination and innovation.

And then the agile, innovative, little CloudStore only went and fell over for four days. Smallness isn't necessarily the solution.

Intellectual over-heating, having to think again and re-assess the evidence, ... Bound to give you a headache. It's a poser, isn't it. No wonder a few shirts went for a burton amid the general brouhaha of wailing and gnashing.
Posted by David Moss at 17:02